Exploring the Kongsfjorden and Krossfjorden

The weather is unsurprisingly erratic, the sea appears more tangible today with a light swell coming from Greenland. The low-lying clouds however where pushed away by some patches of sun offering us a unique scenery of the Kongsfjorden. While cruising into the Kongsfjord, the MV FRAM arrives during the morning at Ny-Ålesund, the former coal-mining settlement. This in the world probably most northernly located settlement discontinued its mining activities following a major mining explosion in the 1960s. After this tragic incident, the settlement has been transformed into a world reknown research settlement, focussing on climate change. 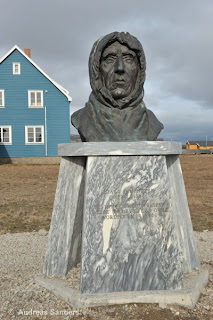 We also meet Roald Amundsen – not in person – but this time cast in bronce. The research settlement’s significance is inextricably linked with early Norwegian polar history and still pays homage to its iconic adventurous visitor. Our lecturers guide us through the convoluted history of this settlement. 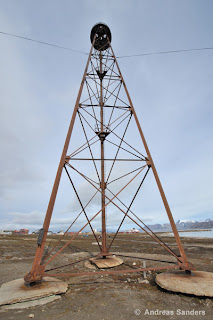 Eventually we can leave the settlement for a short while and visit the anchoring mast which Amundsen used to fly to the North Pole with the airship called ‘Norge’, before we head out into the Krossfjorden. 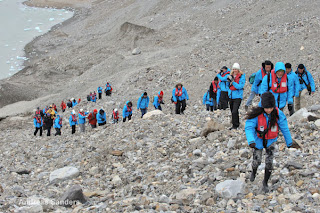 Our second landing leads us to the 14th of July Glacier were the ‘sporty’ guests receive a treat in the form of a guided tour up to a side moraine of the glacier frontier. This somewhat strenuous tour showed its immediate reward once the steep ascent was ‘conquered’. Here we can get a better view of the V-shaped crevasses. We could take a glance into the deep blue glacial ice, while our guides explained the intricacies of its physics. 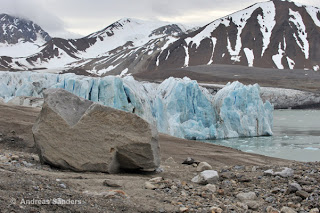 Many others, though, ventured to the western entrance of the fjord to explore a cave called ‘hall of silence’ which mutes the sounds of an adjacent bird cliff.