A True Antarctic Day and A New Year! 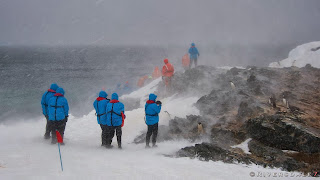 There was only light snow but it blew nearly horizontally as winds gusted to 19 meters per second or 40 miles per hour. 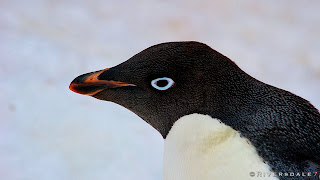 Here we could scramble over the bare andesite rocks to the snow field above where we found ourselves among a large mixed colony of Adelie and Gentoo Penguins. The wind continued to gust and the snow continued but all of us had the full experience of a true Antarctic day landing under true Antarctic conditions. Conditions that to be honest were a major downgrade from the sunny and relatively warm and calm conditions we have had at our landings in the South Georgia and yesterday at .

These true Antarctic weather conditions prevailed the rest of the day. We motored southwesterly in Antarctic Sound dodging floating ice. On the bridge, our biologists kept a continuous lookout for wildlife, snow hampered long range visibility but we did see humpback whales on several occasions.. Our travels in Antarctic Sound came to an end at .  This island, shaped like a scoop of ice cream, is where the Antarctic Sound opens into the expanse of the . 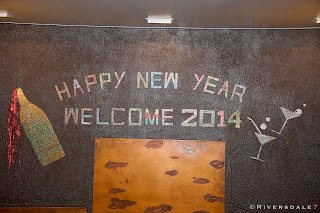 At Rosamel we reversed course and headed for . On our way we passed a tabular ice berg that stretched almost 1 nautical mile or almost 2 kilometers in length. The width of the big berg was left to our imagination. Tonight we welcome the New Year first with a dinner then a gala celebration.

A CLOSING CORRECTION:
In yesterdays blog there was an error concerning the Shackleton’s small boats.

Shackleton’s men arrived at Elephant Island in 3 boats: the James Caird, the Dudley Docker and the Stancomb Willis. For the sail to the James Caird was strengthened and decked over.