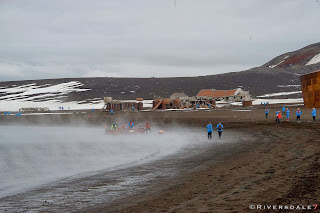 dawned in a foggy day. Our entrance through Neptune’s Bellows was clear at sea level but fog and low clouds obscured the higher reaches of the Island. The first passengers ashore were those hiking to visit the penguin colony at Baily Head. The fog at higher elevations could quickly clear and just as quickly return to obscure the prospective trail. Our expedition staff had their years of experience and GPS units though and set off with about 80 passengers. The hike to Baily Head was a bit misty at the start but when we reached the rookery we had a good view of the hundreds of Chinstrap Penguins.

Two other activities also took place: a glaciology/geology tour used Polarcirkle boats to visit several locations along the inside of the crater. After passing by the unoccupied Spanish and Argentine station they landed and explored a fumarole site and the deformed Black Glacier. The fog at altitude did not affect the mornings kayak trip and they were able to paddle close to the wreck on the west side of Neptune’s Bellows. This wreck is the whale catcher boat “Southern Hunter” which grounded on Raven Rock in the middle of the Bellows. The sea and wind conditions were nearly flat calm and the Kayakers ventured through the Bellows and circled Petes Pillar a free-standing column of volcanic rock, just outside the Bellows. 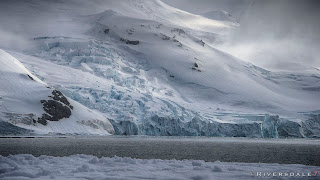 Those not on one of these longer endeavors walked among the ruins of whaling station Hector and the buildings that housed first the whalers and later the British Antarctic researchers. Our visit closed with an unprecedented number of swimmers, more than 60 people are now Antarctic swimmers with the certificates to prove it.

Our afternoon landing at Half Moon Island was made in overcast conditions. From our landing site we hiked past 100’s of Chinstrap Penguins and over the ridge to reach the penguin colony on the south side of the . Here we saw a few Macaroni Penguins among the large Chinstrap colony. 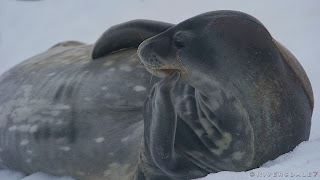 While we were ashore some our shipmates circumnavigated Half Moon Island by kayak, experiencing moderate swell and wind as they paddled the last stretch to the landing site. They were able to see several weddell seals and the beautiful glaciers on the backside of the island- As this landing our last in Antarctic drew to a close we could not help but reflect on how fortunate we have been on this trip to experience the Falkland Islands, South Georgia and lastly Antarctica. The FRAM lifted its anchor and we headed for our crossing of .