Blue Skies, Grey Skies - who cares, we are sailing again!

Before midnight the sound of the announcement bell goes into every cabin - this must be something BIG.

It is the captain’s voice, clearly with a timbre of ease. And indeed, he is the bringer of good news: The damage is fully repaired, testing successful, FRAM is ready to leave. And a short while after we feel the familiar vibration going through the vessel. Our stay in Eidfjord is over, we will be in Balestrand as planned.

All in all, not much damage. What a relief!!!

In the morning we pass the important landmark  - Sognesjøn, the gate to the second largest fjord in the world, only beaten by the unreal Scoresby Sound in East Greenland.

As if the weather is not approving of us leaving the Hardangerfjord, the skies are grey and cloud-laden. But the atmosphere could not be more serene, everybody is so happy to be sailing again. The morning lectures are very well attended, and there is quite a bunch of them.

And then we have a extra excited Olav today, as we are visiting his roots, which lie in the scenic Fjærlandsfjord. His family has been there since the 16th century, and today we get a first-hand account of everything that has happened ever since. 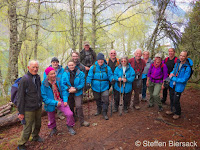 The afternoon finds us arriving in Balestrand, basically just around the corner from Fjærlandsfjorden.
This is the center of art, youth education, and cider. There is statues and monuments galore, and Ralf has a handsomely sized group for his cultural walk through the town.
Balestrand is also the departure point for a lovely hike into the adjacent mountains, a pretty steep thing to do. Quite many of our hikers had given up in the past, long before we reached our goal, Orrabenken, nearly 400m above the fjord and with a breathtaking view.
Not so today: Everybody not only makes it, but also continues further up towards Balastøylen, until the deep wet snow of springtime forces us to return.
By the way, the senior member of our hiking group is 87 years old… what an inspiration!

Email ThisBlogThis!Share to TwitterShare to FacebookShare to Pinterest
Photograph(s) by: Hilde Foss, Steffen Biersack
Newer Post Older Post Home
Welcome to MV FRAM's Expedition Blog!
MV FRAM is the most modern expedition cruise vessel belonging to the Hurtigruten fleet, roaming polar waters and taking people to remote places where only few go. In order to give you the chance to travel with us, even if only on your computer screen, we have created this blog. Here you can see what we have seen and read what we have done.
And, maybe you will be onboard with us one day!
All About MV FRAM - here
FOLLOW US ON FACEBOOK !