This voyage offers the unique opportunity to experience Norway “from within”: After having had all these comprehensive insights from our Man of Fjærland, Olav, we are entirely in Expedition Leader Karins backyard today.
This is to be taken literally, as the landing site on the island of Atløy is in fact the yard next to her boat house. She even had an impeccable stairwell built for people to get off the boats, just before we arrived.

What a change of landscape we are experiencing! No longer are we surrounded by looming fjord walls, gushing waterfalls and the debris fans of the numerous avalanches that are a hallmark of the inner fjord land, an open sky is above us, unhindered and blue. The grey hills are round and gentle, peacefully sticking their heads out of lush pastures, populated by sheep of several generations. The mood is pastoral, serene, and it affects everybody who goes ashore immediately. 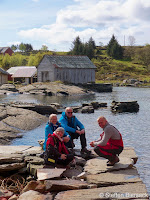 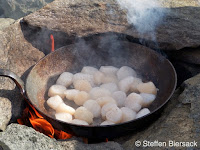 Not only we can visit the ancient fishing gear of Karin’s family in the boat house and take a sunny stroll to the old community church where guided tours are given and a little concert is played. For those who want to combine the feast for the eyes with a little amuse-gueule, our chef Eirik comes ashore with no less than 10 kilo of scallops, caught and bought only last night from a local fisherman.

Eirik is also an expert outdoor cook, and in no time he has a fireplace built with the local rocks. Five minutes later the scallops are sizzling in the pan, and we have the most precious, delicious seafood on an all-you-can-eat base! 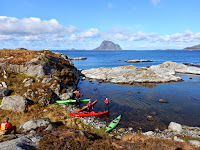 And Karin’s smile reaches from ear to ear, because all her family is around, parents, brother, aunts. A full family gathering, all of them helping, explaining, showing, smiling.
What a start for the day, especially for the kayakers, who could explore this wonderland from sea level.

When glaciers reach the sea, they turn their erosional power from a narrow blade into a wide grater, serrating the coastline into many low, rounded individuals - islands.

Norway has an incredible number of them, and just after lunch we visit the absolute westernmost of those, Værlandet and Bulandet. 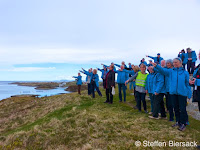 Værlandet has only 9 square kilometers but a striking geology. A deep green metamorphic rock crops out next to “Black Beauty”, a dark breccia that only occurs on this small island. Worldwide. And that’s not the end of it: On a very small area, the breccia is overlain by “Picasso”, a very, very colorful conglomerate. May these names not be overly scientific, they describe well what you see.
Together they tell a fascinating story of supercontinents, ruptures and erosion, a wild chapter of Earth’s history. And as they are exceptionally pretty, they get fashioned into table tops and exported around the world.
Knowing this, our guests are very pleased as owner Hjerman presents them with a little piece of the rock. 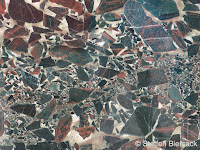 Now we enter a strange world, the westernmost outpost of Norway - Bulandet. It is not an island, but an archipelago, consisting of 365 islands and islets (So you have one for every day of the year). Some of them are so low that they are under the water line at hight tide.
Our guide Ruth tells us interesting stories from the times when there was no bridge, no connection but the boat. Many of the islands accommodate a single house, because there is simply not more room for more.
Marrying into this place sometimes occasionally entailed a nasty surprise when the bride saw the smallness of it for the very first time. 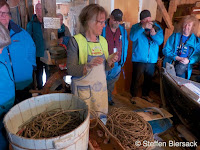 But it is beautiful, no doubt, in a romantic, wild way. The thought that this is indeed the absolute end of the country adds to it, especially when you stand on the hill and face West.
Back in Værlandet we get more information/demonstration from Ruth, who is a walking encyclopedia of the island’s history, shown at its best in the small Peter Hansen Museum, next to the harbour.
Speaking of which: As we return from our fine excursion, we find Ralf there, playing his accordion together with a local musician. A wonderful atmosphere rounds up the day.
And now it’s time to weigh the anchor and go even further west.
Beyond Land’s End.

Email ThisBlogThis!Share to TwitterShare to FacebookShare to Pinterest
Photograph(s) by: Hilde Foss, Steffen Biersack, Tessa van Drie
Newer Post Older Post Home
Welcome to MV FRAM's Expedition Blog!
MV FRAM is the most modern expedition cruise vessel belonging to the Hurtigruten fleet, roaming polar waters and taking people to remote places where only few go. In order to give you the chance to travel with us, even if only on your computer screen, we have created this blog. Here you can see what we have seen and read what we have done.
And, maybe you will be onboard with us one day!
All About MV FRAM - here
FOLLOW US ON FACEBOOK !