The Most Expensive Haircut in History

Small, almost attached to Scotland, but nevertheless a world in its own right; the Orkney Islands are a flat-lying, extensive archipelago of 60 islands, 20 of them inhabited by just about 20000 Orkadians, most of them on the main island, which they call “Mainland” (they love it simple).

Being as close as 10 kilometers to Scotland, the people beyond the Pentland Firth still have developed their own language, Norn, which is unique and a linguist’s delight.
All in all, the Orkadians are proud enough to be neither Scottish, and certainly not British.
With a population of just over 8000, Kirkwall is quite a big city, at least compared to what we have seen in Norway in the last few days.

Whereas in the olden days sheep farming and fishery were the only source of income, there is now quite an emphasis on tourism, which of course benefits from the short distance to Scotland; Aberdeen has established a regular ferry connection to Kirkwall, and so the streets feature decidedly more souvenir shops than they did earlier.
Another contemporary way of making money is heralded en route to the islands - oil. The North Sea is literally peppered with oil rigs, impressive structures that don’t really add to the beauty of the ocean but are a working environment for many.

This is a stark contrast to the lifestyle of the first settlers who came here. By sheer luck and gale force the most amazing stone age site was discovered in 1850. Skara Brae is so well-kept, it is hard to believe that it was built already 5000 years ago. But already then people took advantage of the fertile soil and the riches of the sea. At that time the main island apparently served as a religious realm as well: The Ring of Brodgar is one of the best stonehenges in the world.

Life has been busy on the islands ever since: The Picts are mentioned in Roman documents of the 3rd century, and of course the Vikings had a saying here. After Harald “Bel Hair” I. won the battle near Stavanger in the 9th century, he finally decided to have his hair cut. His barber was no other than Ragnvald Eysteinsson “the Mighty”, who then received the Orkney Islands as a fiefdom. And we think haircuts are expensive today… 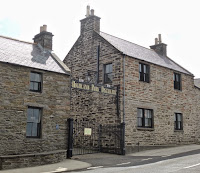 Definitely the most dominating sight of Kirkwall is the St. Magnus Cathedral. Erected around 1137, its beautiful red sandstone structure became not only an impressive monument of young Norwegian christianity, but was the outpost of the archdiocese of Trondheim.
The Norwegian influence waned after the Kalmar Union with Denmark, and came to a halt after the Northern Isles were given as Princess Margareta of Denmark’s dowry, when she got wed to King James III. of Scotland.
Fortunately, otherwise we wouldn’t have gems like the Highland Park Distillery, that opens the doors for a demonstration of how to make real good Scottish Whisky. 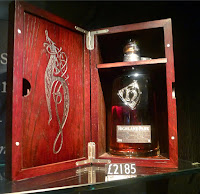 Speaking of which:
Not Champagne, but something much rarer is used after our departure from the Orkneys in a special ceremony - the baptism of two new boats.

During our expeditions to the polar areas we have seen a growing demand for extended boat rides into the most remote corners of our itinerary, where even FRAM can’t go. These two large and powerful Polar Cirkel boats are the ticket for even more awe-inspiring excursions, and we are looking forward to seeing them in icy action.

So Expedition Leader Karin and Doctor Milagros sprinkled (or spilled..?) some of the precious FRAM explorer whisky over the two mighty boats, under roaring applause of the crew.
The names of the two new boats? Amundsen and Nansen.

Email ThisBlogThis!Share to TwitterShare to FacebookShare to Pinterest
Photograph(s) by: Arne Kertelhein, Hilde Foss
Newer Post Older Post Home
Welcome to MV FRAM's Expedition Blog!
MV FRAM is the most modern expedition cruise vessel belonging to the Hurtigruten fleet, roaming polar waters and taking people to remote places where only few go. In order to give you the chance to travel with us, even if only on your computer screen, we have created this blog. Here you can see what we have seen and read what we have done.
And, maybe you will be onboard with us one day!
All About MV FRAM - here
FOLLOW US ON FACEBOOK !