Dressed in White (or how the German Navy got Foghorns...)

We have spent many days inside the looming shelters of the most spectacular fjords of Norway. One of the agreeable side effects was the calmness of the waters; you could literally play a round of mikado any time you liked.

Well, last night we had a long stretch to take along the outside of the Norwegian coastline, and the difference is quite noticeable, things are moving, people are swaying. But then again, this is a ship, isn’t it…?

In the morning we take a spectacular left turn around Karmøy Island through a narrow passage in order to get to our destination, Skudeneshavn. The ice age-rounded rocks are sticking out of the water on both sides of FRAM, crowned by cute white houses, whose owners can look right onto our breakfast tables.
And on the outside of this impossible passage sit the lighthouses, of paramount importance in the olden days to guide the vessels into the safe embrace of Skudeneshavn. 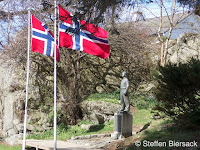 Today these lighthouses have lost their significance, some of them are even privately owned as a homestead. This is probably the pinnacle of a home with ocean view.
Under the morning sun but with a fresh breeze we go to pier, ready for the last set of excursions. 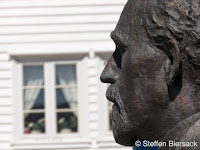 Named after a certain type of sailboat, the village of Skudeneshavn made it to considerable fame in the times of the great herring catch. Fishermen came not only from Norway but from all over the world, and they gave their cultural input to the otherwise plain white wooden architecture of the place.
Whereas the modern city of Skudeneshavn has about 3200 inhabitants, including the new built city quarters that didn’t exist at the time, every peak season in the early 19th century saw over 40.000 men arriving, creating a huge lodging problem. Nevertheless, the industry yielded so much money that people were willing to endure all kinds of hardship for it. 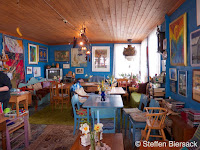 Today the old town of Skudeneshavn is the best preserved historical town of Norway, a bright white gem with narrow alleys and adjacent wharfside warehouses. It is even a special occasion today on the 8th of May. Norway celebrates Liberation Day, commemorating the end of the Nazi oppression, so there is Norwegian flags all over the place. 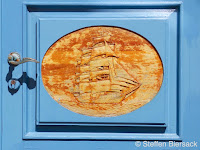 Even the word picturesque needs to be stretched to its extreme if you ever try to describe the peaceful, film-like, romantic atmosphere of this place, with the neat gardens, the cosy coffee shops, and the artistic carvings on doors and fences.

The people of Skudeneshavn are proud of their heritage and more than happy to answer questions or help to reenact the olden days. 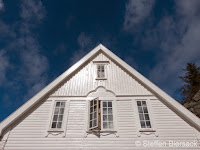 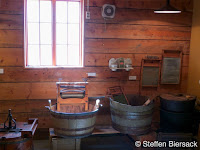 Original stories have happened indeed: On one of his many visits to the country of his heart, Norway, the German Emperor Wilhelm encountered a man in Skudeneshavn who just made a funny invention: Ole Christian Hansen made strange tubes out of metal that could produce an enormously loud, deep sound - he had invented the foghorn. The Emperor was so impressed by that and saw immediately the military use for it. On the spot he ordered 40000 horns for the German Navy, quite a tall order for a happy Mr. Hansen…

The visit continues. And what can I say? The weather is really doing its best to underline the pretty features of the place; after a short, biting hailstorm in the morning the sun comes out and shines through the washed air of the island of Karmøy, bringing out all the beauty of the place.
The Mælandsgården Museum looks rather small from the outside, but it is a true treasure trove, curated with the people’s full heart, in order to really bringing the past times as alive as they can be.
After a comfortable, beautiful day in paradise it is time to get back on the ship - unfortunately, as this was the last visited place of our journey.

Good thing that the weather is not intending to make our lives more difficult than necessary, so FRAM is moving only a little. That allows for the evening program to take place as planned. The Expedition Team gathers in the observation lounge, ready to answer all possible questions that have accumulated during the trip, and the evening sees the current version of the famous MV FRAM crew show, which is well attended.