We are now in east Iceland and about 2/3rds of the way around Iceland on our circumnavigation. As an aside, this is a fabulous way to see a country like Iceland. Many parts are remote and difficult to get to by road. On the Fram, we slide almost effortlessly over the surface of the water and make our landings pretty well anywhere we like. Having said this, we are mainly hitting the coastal high-spots. Almost all of our landings have been in communities, towns and cities with a wharf, along-side which we can dock.

You have probably noticed that many of the places we visit end in “fjordur”. This of course means fiord in Icelandic and just indicates how many places along the coast are tucked inside a fiord where the waters are sheltered and normally deep. Seydisfjordur is a pleasant little community, obviously driven by the fishery (at least as judged by the fishy smell outside at least!). Situated almost in the bottom of the fiord, the small town hugs the shoreline on both sides. Our guests had three options for the morning including a nature tour, stroll around the town, and a hike up to a waterfall. Our excursion to Skalanes allowed us to get a real taste of the farm/countryside life in Iceland. Our guide cooperatively owns the place with his family and welcomes student groups from all around the world to teach them about nature. Accompanied by their two dogs, we went on a walk around the property where we saw many birds like puffins, fulmars, kittiwakes and oystercatchers. 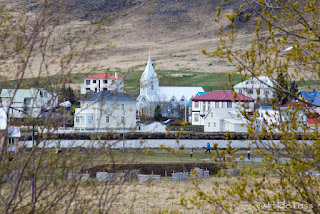 About 35 of us hiked up behind Seydisfjordur to a beautiful waterfall. The scenery was spectacular- this is an understatement. On the river above the falls, we found two pairs of Harlequin Ducks. They are there to breed. This species feeds on fly larvae in the river and when the chicks hatch the larvae are particularly abundant. 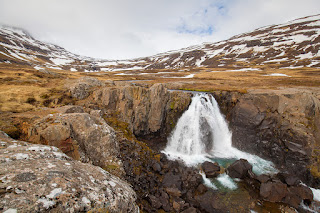 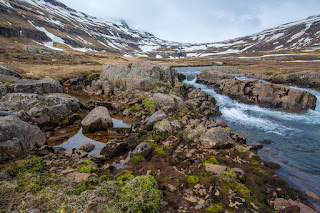 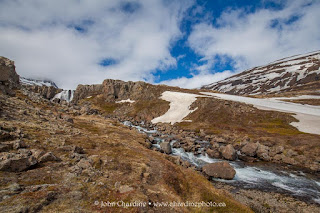 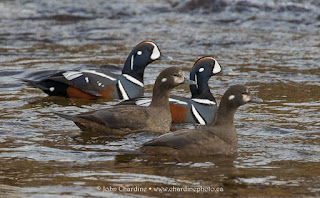 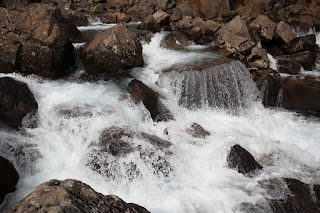 After lunch we cruised south along the spectacular coastline of east Iceland. Fantastic volcanic mountains rimmed the coast, plunging straight down to the sea. Almost all of the cliffs had breeding seabirds on them- kittiwakes, fulmars and guillemots (murres). The volcanic rock seems to provide just the right depth of ledge that these bird species need.

We arrived at Eskifjordur later in the afternoon but as we had until 10:00pm no one felt rushed. Some of us went on a tour focussing on the local fishing industry while others travelled in 4x4 Jeeps to a local but remote and hard to get to location. 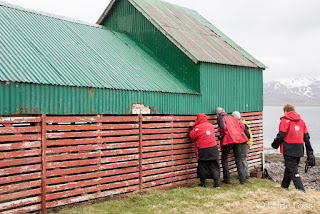 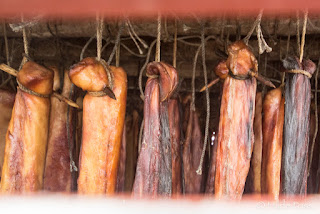