How to get rich with a waterfall 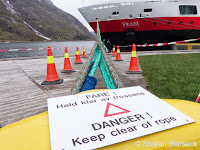 This voyage is named “Spring Adventure”, the latter word conveying a bit of the element of surprise in everything we do.

That certainly holds true for the weather, which really spoilt us yesterday. Today things have changed a bit, the sun hides behind a layer of grey clouds that moves visibly with the strong winds this morning. These changes are not surprising: During the night we have entered the large Hardangerfjord System, which reaches far into the high rocks of western Norway. These deep cuts in the landscape have a significant impact on the meteorological conditions, especially when they are surrounded by glaciers. In other words: Fjords can make their own weather.
Knowing this, we just put on another sweater as we go to pier in Eidfjord this morning.
This cosy village is nestled into the flatlands that come down at the head of the namesake Fjord, at the conjunction with Osafjord.
This place was so favorable for living, fishing and hunting that it has been lived in ever since there were people around.
The morning hike with Arne and Katja is a roundhouse kick in history, starting at the stout little church in town, which is connected to a strange woman:

Rike Ragna was a woman of today’s Eidfjord community who - according to the folk tales - left her husband on a small, flat island at low tide and went about other business. When the tide came back, the man drowned (seems like the tides have been much higher in the olden days…) and she was accused, well, if not of murder then at least of something nasty. Her punishment was to go on the pilgrimage to Santiago de Compostela, which she quite dreaded. Instead she offered to erect the church in Eidfjord and dedicate it to St. James. Apparently the deals was made, and today there is a drawing on her tombstone inside, where she hands over a model of the church to Saint James.

After that it is time to “go wild”, meaning taking the path along the river towards the glacier lake further up. The first flowers are out, the white bossoms of sorral, the occasional violet and clover.
The road climbs up to a high plateau, connecting Eidfjord and Osafjord.

The valley, although over a hundred meters above the fjord level, is filled with river sand, which seems to be a bit of a riddle. But the dynamics of Earth can explain everything: After the heavy, heavy load of the last Ice Age was taken from Scandinavia’s shoulder, it experienced  a considerable uplift by simple buoyancy; still the western shores rise by about 2 mm a year.

Scattered across this platform there are a number of piles of very round boulders. We learn that these are indeed Viking graves. The Vikings were able to travel narrow rivers, as their boats could go forward and backward at the same speed, an enormous advantage not only for warfare, but trade. Often forgotten is that these proud people were not only fierce warriors but successful merchants. And some of them found their last rest right here. Who knows who was buried underneath these rocks…? Many of these graves have never been opened, so we are free to speculate.

Eidfjord is what the Norwegians call a “kraft kommune”, a power community. Believe it or not: They rent out their waterfalls to producers of hydroelectric energy, for hefty sums and under the condition that - at least during high season - the waterfalls have to be pretty and strong enough for the tourists.
So the money in these parts is literally flowing in…
Smiling at that, we carry on over lunchtime through the scenic Fjord until we reach our afternoon destinations. Yes, plural. Those who are interested to learn about ancient living styles get a boat ride to the open-air museum of Agatunet, a picturesque settlement, the houses of which have been kept resp. Restored the old way. This place breathes Norway’s past like hardly any other. 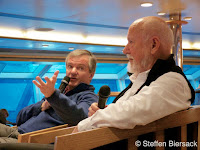 Jut on the opposite side of the fjord is Ullensvang, one of the apple-and-berry centers of the Eidfjord community. The orchards are surprisingly big, trees are squeezed in the most improbable corner.
The beauty of the place invites for a walk, and in the evening everybody returns fairly hungry.
The later evening holds a welcome surprise, a rare discussion, taking place in the panorama lounge: Guest Professor Julian Dowdeswell and our “own” Olav Orheim stage a debate about Roald Amundsen and Robert Falcon Scott, taking up the very old controversy that shook the world in the early 20th century. Tonight a public figure and polar expert from Amundsen’s country meets the director of the Scott Polar Institute. One is tempted to introduce them “and in the right corner…”
But of course, we have to gentlemen sitting here, so it is turns out to be an intellectual challenge on a high level. Glad we could witness!