under the TOWER BRIDGE

Yesterday evening the MV FRAM was announced to pass the narrow TOWER BRIDGE in the city of London at 4.45 am. A lot of guests were early up this morning to watch that exciting moment from the observation deck or from the front part of the ship. The weather was excellent this morning. No wind, warm temperatures. The sun was just before horizon. You could hear the voices of the blackbirds from both sides of the Thames River. A mile before we reached the TOWER BRIDGE, the MV FRAM turned around and a tow boat towed our ship backwards toward the bridge. The TOWER BRIDGE slowly opened its wings and we could pass this historical monument.

The MV FRAM went alongside the old battleship HMS Belfast. 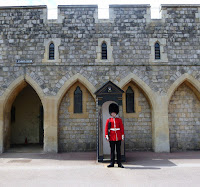 Early in the morning at 7 o clock all passengers easily entered a sightseeing boat which brought them to the other side of the river, where excursions started. Four excursions were offered: Panoramic London, Highlights of London, Pub lunch & Covent Garden, Royal Windsor, River Thames & Westminster Abbey.
At 4 pm all guests were back on board. One and a half hour later many guests were standing on the back, waving with a glass of champagne or soft drink in their hands while we set sail and passed the TOWER BRIDGE and further on Greenwich on our way back to the North Sea.

Later on, the fanny MV FRAM fashion show with the fantastic models of the crew and expedition team took place in the observation lounge.