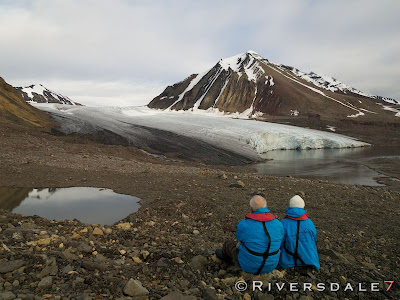 Our apologies as we neglected to inform you of our morning’s plans at Gåshamna.  No doubt it was quite a surprise when you saw so many people standing on the beach when you walked down from the moraine.  Once we realized that you were there first we made haste to leave the beach so as not to disturb your privacy.  Upon reflection we can imagine your disappointment when the colourful blue and red buffet hopped into small boats and fled the scene.  We do however think it a little unreasonable that you followed us by swimming to the next beach to which we had evacuated.  Furthermore it seemed more than a little aggressive that you would further challenge us by walking the 2km to the west and then take over our main landing site.

This morning we split everyone into two groups at two different landing sites.  Starting at 09:00, the hikers landed first about 2 km to the east of the main landing site at Gåshamna.  Once they were on their merry way, the remainder of the Expedition Team prepared the main landing site and by 10:00 the first blue jackets dotted the expansive plain.  It wasn’t much more than 30 minutes into the landing when we got the call to evacuate. Apparently the hikers to the east of us had encountered a bear.  They had already abandoned their site and the bear was steadily moving to our location.

The Expedition Team very efficiently cleared everyone from the landing site in a brief thirty minutes.  Sure enough, once everyone was safely on board Fram the bear strolled down the entire length of the beach we had just occupied!

Here follows the actual report of what transpired on the hiker’s beach.

The hike sets off at the flanks of a small, but very beautiful glacier, the Körberbreen. Since FRAM drops anchor far away we are ferried over with the Polar Cirkel Boats in two tiers, which gives us the time to clamber up the little moraine and get a good view on the bluish wall of ice.

Just as we have everybody on the narrow path a Polar Bear appears out of nowhere at the foot of the moraine where he must have been dozing behind a rock. After a few steps he stops for a moment, obviously to study us. And then he walks towards us...
That requires action. While everybody makes it down the moraine and back to the beach, two things happen: The boats are called back to the beach for fast evacuation, and we ready our flare guns. Since the bear keeps coming at the group, the first flare is fired - no reaction. These things are really, really loud and usually one is enough to scare the animal away. Not this time. More flares, not a flinch!

Finally the boats arrive and start bringing people away. Now the bear takes to the water, but instead of leaving he starts swimming towards our beach. Bugger!
Fortunately the boats distract him more than the flares did, so with the help of the boats we can buy us some time. Since FRAM is far away we quickly bring everybody to a nearby bay as a first step, in order to do a "normal" evacuation from there. The bear swims away now, had enough of us, as it seems.

As we all are in the boats, relief sets in and a lot of laughter is heard about this spectacular morning show. But isn't it the hallmark of a good horror movie that the villain comes back after the Happy Ending…? Just as we are down to the last two boat loads on the second beach, the very same bear appears on the far end of said beach. He must have run the whole way to be here in such a short time! He gets as close as 60 metres now, obviously uncertain what to do. But somehow, sometimes, instincts wake up in an otherwise very determined animal. Maybe he finally felt that red jackets with rifles are not good food, maybe the last bang of our flares finally got into his thick skull - he now decided to keep distance and finally trotted away from us.

While the regular landing was going on in the far distance of Gåshamna we went parallel to the shore to keep an eye on the bear. And believe it or not, now he sped up to about 5 knots - in the direction of Gåshamna...

That means full evacuation, because at that speed he will be there in under half an hour. About 100 people have to be shuttled back to the ship. That takes a while. And again, timing turns out to be on our side, as the last of our guests hop into the boat, the bear, the relentless, stubborn, probably very hungry bear, arrives on the shores of Gåshamna. This time we wave him good-bye. All of us - we are definitely out of reach now.
What an exciting way to start the day!

Then, at 13:30, we were enjoying scenic cruising in Brepollen when another bear was spotted lying peacefully on the shore.  This was another large male.  It got up as we approached, stretched, yawned and then plopped back down again, obviously not bothered by Fram’s stealthy approach.

We stopped to admire the bear for a few minutes and then continued to Burgerbukta.  This was the first time landing at this really splendid site.  We were surrounded by glaciers.  A trail was flagged up the ridge of lateral moraine that bordered glaciers on both sides.  The trail continued in a very large loop to where we could actually walk on the glacier!

When we got back to the beach we were then treated to a cruise in the Polar Cirkel boats to one of the glacier fronts deep in the bay.

As if that weren’t enough, when we arrived at the ship there was a sumptuous barbeque on deck seven.  A perfect day! 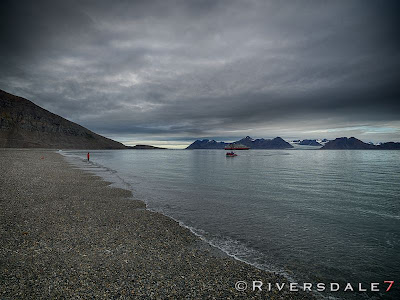 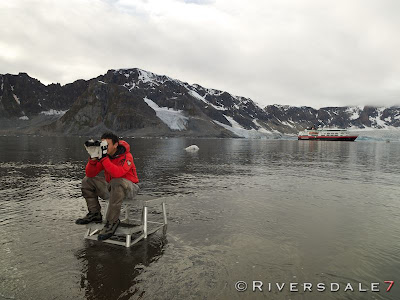 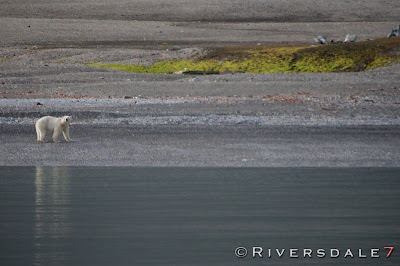 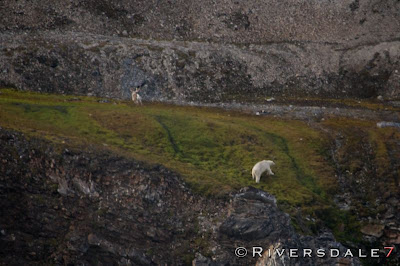 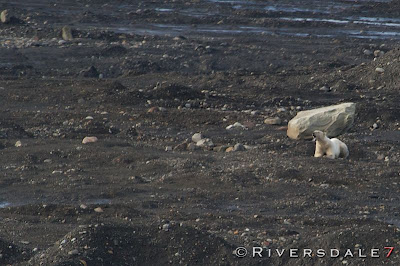 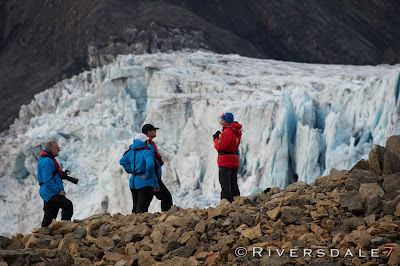