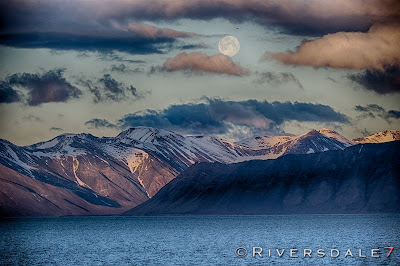 If someone invited you to a place which is not only situated in the middle of nowhere, but at the northern end of an island 1500 kilometres north of the North Cape, in order to spend a winter without electricity at a mere 35° below, no running water and any amenities of modern life, instead surrounded by hungry polar bears and constantly swept by terrible, icy winds that can kill you in no time - would you accept...?
Well, the answer is not such an obvious NO! as one should think if it comes to the shores of today's morning destination - the Woodfjord.

There is no place in Svalbard's North that has attracted more people in the last decades. Surely one of the most well-known is Christiane Ritter, whose book about a woman experiencing the Arctic winter has been translated into seven languages and gives a very personal and philosophical account of the mental strain that can be converted into sheer admiration for the roughness of this environment. "Bring toothpaste for one year", was what her husband wrote before she left to meet him up in Gråhuken.
The legendary Norwegian hunter Hilmar Nøis set up a hut at Mushamna. Hauke Trings, German physicist and well-known author, nourishing the theory that life sprang initially from the ice, spent one winter in Mushamnabukta after his sailing boat froze into the ice.

Mushamna is also the location of probably the most luxurious trapper house in the whole of Svalbard. Buildt by the stubborn trapper Kjell Hovelsrud next to Nøis' hut, it features several extra sturdy buildings, all made from driftwood, a lofty meat rack and the smallest blockhouse in the Arctic - the toilet.
In this historic setting we start with two groups of early morning hikers on a brisk walk far inland, across the plains and into the wide open valleys that display a zebra pattern of snow patches and dark soil that shines magically in the morning light. For nearly three hours we go exploring in this amazing country, followed by Arctic Skuas, watched by Barnacle Geese and engulfed in the sound of many rivulets that criss-cross the valleys.

Upon return, a wonderful surprise is waiting for us: A Polar Fox has decided to take a nap right under our noses, and totally unabashed by the people around he lies there curled up and ready for us to take pictures. And the occasional yawn shows us that he really is sleeping, nothing more.
It is only a short leg over to Liefdefjorden, and the weather is magically holding, although many times it seems like the clouds are starting to pour down on us. The light are actually perfect for going out in the ice. And that is exactly what we do, two miles from the vast Monaco glacier we lower the boats to the water and start an ice cruise in front of a 45m wall of blue. The intense colour indicates fresh calving activity, and indeed it doesn't take long until the first walls of ice collapse right in front of us. The thunder is frightening, a big splash wave radiates from the impact, but we are of course in a safe distance, so we can admire this powerful spectacle undistracted.

Light and shadow play with us, thunder and ice. It is indeed a festival for all senses.

Few hours later:
In the twilight of the beginning dark season we suddenly hear weird noises over the loudspeakers on board, like the mixture of grunting, breaking toothpicks and sipping Martini. This is a recording of a male walrus under water, and the reason for this strange soundscape is coming up in front of us - Moffen island. This heap of scree in the middle of the ocean offers just the right angle for walruses to haul out, so the chance of seeing them is pretty high. And there they are, lazily clustered on the beach, hardly moving but unmistakable with their bright tusks. A group of maybe 15 animals is being photographed a lot tonight. For quite some time we stay with them, until we have to set course towards East, continuing our journey into the wild. 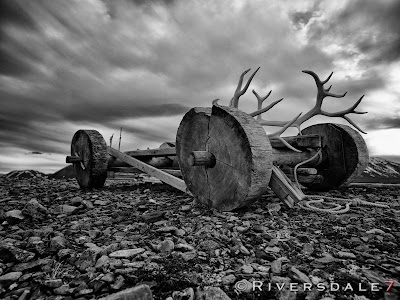 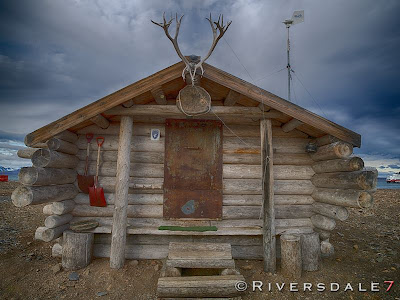 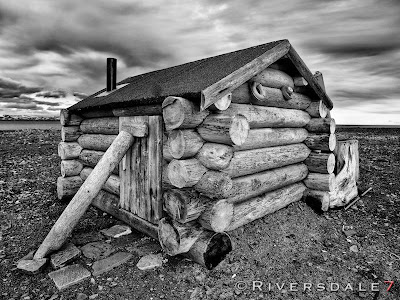 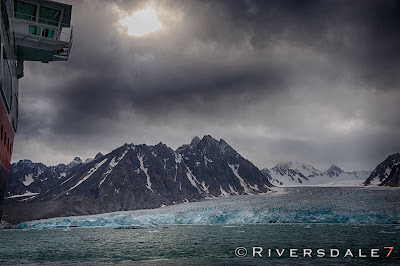 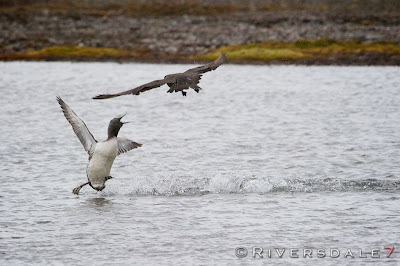 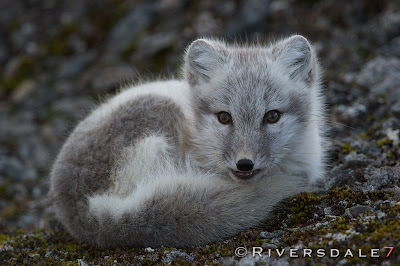 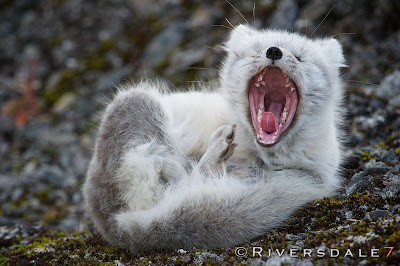 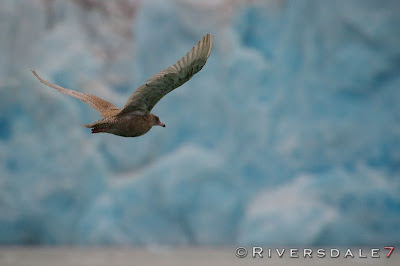 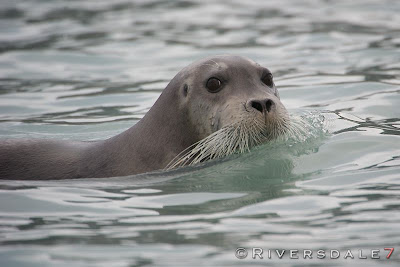 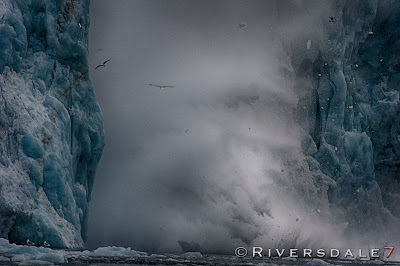 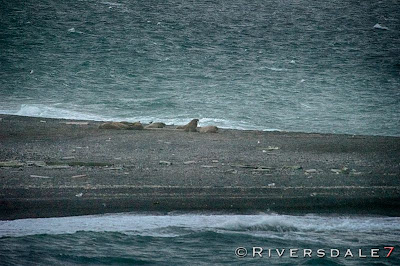