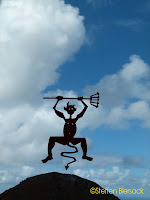 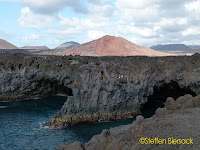 Heard the name before? The Happy Islands? You do know them, for sure - they are nothing else than the archipelago nowadays known as the Canary Islands. The name has been used for a long, long time and was coined by the Phoenicians when they found in them not only a good place for trade, but an array of peaceful, sunny and mild pieces of land, emerging from the blue seas.

Well, that's just how we see them today, as we reach Lanzarote, second oldest of these - geologically speaking - youngsters: Only 15 million years ago the ocean boiled and steamed before huge clouds of ash were ejected into the skies - an island is born. And should you think that's a thing from the past - think again. The activity is far from over, that's what the guides show us on the excursion to the island's south, which includes a fancy ride on a camel through an unearthly landscape of barren beauty. You wouldn't be surprised to see a mars rover whirring round the corner (just imagine how the guys at NASA would rub their eyes when their images suddenly showed people on camels…). 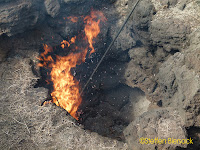 You really get an idea of the thinness of the layer of crust that separates us from the inner forces of our planet, when a bundle of grass immediately ignites in a hole that is just under two meters deep. The following bus ride through the National Park of Timanfaya, where the Devil is the icon created by Cesar Manrique, is as spectacular as it gets, its like a roller coaster ride through a wild Earth from underneath. 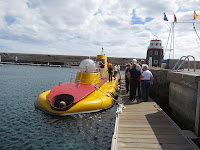 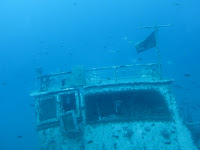 However, wild and violent is not the first impression that you get when you leave the ship here in Arrecife, everything is breathing the air of holiday and the pace is wonderfully relaxed. You can even take a submarine - a real one, it's even yellow - to go for a 34 meter dive to see ship wrecks and fish, fish, fish.

The whole day we spend here, and towards the evening we crown the day with a barbecue on the outer decks. Munging on a tasty steak while watching the sunset behind the volcanoes - unique!
Alas, this evening means also packing - tomorrow a long and colourful voyage comes to an end, the last trip on the northern hemisphere for this year. Thanks to all who made this time so worthwhile!!

Email ThisBlogThis!Share to TwitterShare to FacebookShare to Pinterest
Photograph(s) by: Chelsea Claus, Steffen Biersack, Tessa van Drie
Newer Post Older Post Home
Welcome to MV FRAM's Expedition Blog!
MV FRAM is the most modern expedition cruise vessel belonging to the Hurtigruten fleet, roaming polar waters and taking people to remote places where only few go. In order to give you the chance to travel with us, even if only on your computer screen, we have created this blog. Here you can see what we have seen and read what we have done.
And, maybe you will be onboard with us one day!
All About MV FRAM - here
FOLLOW US ON FACEBOOK !