Welcome to the Southern Hemisphere!

In the early morning hours at 05:42:48 we crossed the equator. The ship´s horn was blowing three times as a greeting to King Neptune. We could not see any red line; there was no sudden jerk to feel, nothing like this. Everything looked the same like before but during the next days we will see the difference when we look into the stars. Everybody hopes for a clear sky during the next nights as we want to see the Southern Cross.

At 15:00 it has been thus far. The ship´s horn was blowing three times again and His Royal Highness King Neptune came on board together with his Queen Neptunia and his entourage.

Everybody has been welcomed by the Captain and afterwards King Neptune´s entourage started directly with the baptism. 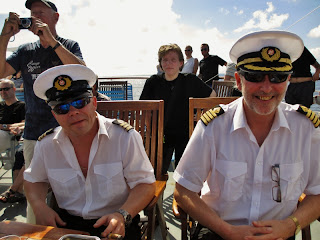 We cannot describe this procedure with words. Please look at the pictures. 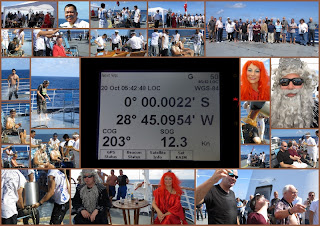 Email ThisBlogThis!Share to TwitterShare to FacebookShare to Pinterest
Photograph(s) by: Else Kristine Tjessem
Newer Post Older Post Home
Welcome to MV FRAM's Expedition Blog!
MV FRAM is the most modern expedition cruise vessel belonging to the Hurtigruten fleet, roaming polar waters and taking people to remote places where only few go. In order to give you the chance to travel with us, even if only on your computer screen, we have created this blog. Here you can see what we have seen and read what we have done.
And, maybe you will be onboard with us one day!
All About MV FRAM - here
FOLLOW US ON FACEBOOK !