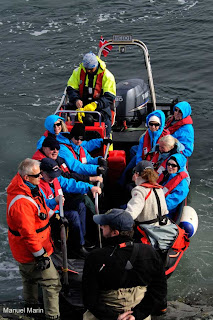 Today was one of the best days that Antarctic could offer. We landed at the Argentine base of Almirante Brown, in Paradise Harbour, on the mainland of Antarctica. One passenger commented upon coming ashore, that she felt like she was living in a dream – but a wonderful dream. People climbed to the top of a hill overlooking the glacier-filled bay ringed by snowcapped mountains. A quick descent was made on nylon-clad bottoms – some people spinning around like tops and ending up in a pile of snow and laughter. Some even repeated the slide. The landing at Paradise ended with a short cruise into the bay, where we observed leopard seals basking on ice floes. The leopard is a formidable predator, with a large jaw possessing sharp teeth. 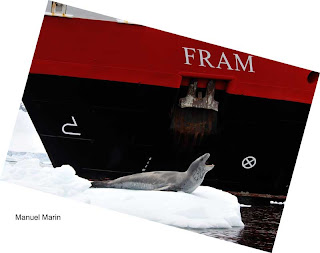 The next destination was whale watching in Wilhelmenia Bay. We knew we would encounter whales, but not the great number we finally saw. Almost everywhere we looked we saw whale spouts. If this wasn´t enough for one day, a large number of Orcas appeared. The Captain maneuvered the Fram into position, but the Orcas obliged us by literally posing for photographs as they swam very close to the ship. It was an amazing encounter with nature

, one that we will not soon forget. The day ended with soft lighting effects on the mountains and icebergs. A wonderful day down south!