Another amazing day in the Antarctic. A spectacular early morning cruise through the narrow confines of the Lemaire Channel brought us to our first landing – the Ukranian base of Vernadsky. The base personnel were very hospitable and everyone was impressed with the living quarters and scientific programs being conducted. Once a British base called Faraday, it was handed over to the Ukranians in 1996 and still maintains a very English flavor. A pub is the main center of attraction, and ladies who offered up a bra were then given a free shot of home-made vodka. All told, it was a fun experience spending time at Vernadsky base. 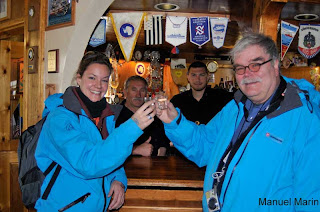 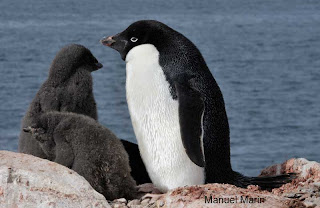 Continuing our journey, the afternoon found us at Petermann Island, home to gentoos and our first adelie penguins. All the penguins were tending chicks, many of the babies were quite large. Blue eyed shags (cormorants) also had babies. Many of us climbed a small hill to view the aptly named Iceberg Alley, and enjoyed a wonderful panoramic view. Several private yachts sailed past while we were on shore. The weather was slightly overcast but the sun occasionally broke through the clouds, offering us great opportunities for pictures of penguins and polar scenery. We were back to the ship in time for our Argentine buffet.