The peak of austral summer 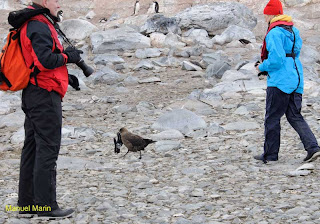 We began landing operations at 9:00. It was a very short ride in the Polar Cirkle boats and then suddenly, we were immersed in Gentoo penguin central. Cuverville, is home to one of the largest Gentoo penguin colonies in Antarctica with ~6000 pairs. Most adults at the nest had two fat chicks.

Circling round and round the adults and fat chicks were the ever-present Skuas. Skuas are the F16s of the southern skies. Large predatory birds that are powerful on the wing and skilled in aerial pursuit. They can also be quite curious. They will sometimes fly off with items incautiously left on the ground… like the gloves in the photo on the blog for instance!

Shortly after noon we weighed anchor and headed for our second landing at Almirante Brown, an inactive Argentine station in Paradise Bay. There was excitement in the air as we all knew this was going to be a landing on the actual continent of Antarctica, not a mere island.

We were treated to brilliant patches of blue sky, occasional bursts of sunshine and nary a breath of wind to stir the mirrored waters of the bay. Most of us hiked to the top of a 120 metre hill behind the small base where we could see the entirety of the bay. No less than three Humpback whales and two Minke whales were spotted from the hilltop. Whether it was on shore, or on the ship, or in a Polar circle boat, everyone had a chance to a see a whale!

As if that wasn’t enough for a full day, there was still the crew fashion show at 10pm and a stunning voyage through Kodak Alley – the Lemaire Channel.
What a day!