At 12 o`clock we reached our anchor position in front of the the small island Iona on of the Inner Hebrides off the western coast of Scottland. In former time the island was the centre of Celtic Christianity and is today renowned for its tranquility and natural beauty. In 563 Saint Columba was exiled from his native Ireland and founded a monastery on Iona with 12 companions. From there they set about the conversation of pagan Scotland and much of Northern England to Christianity. 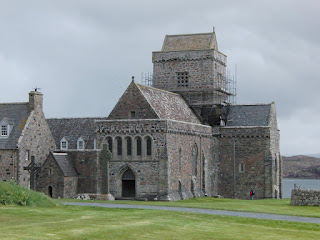 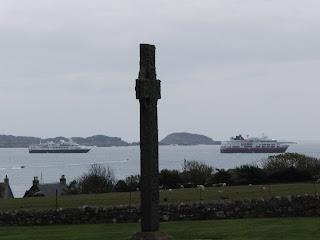 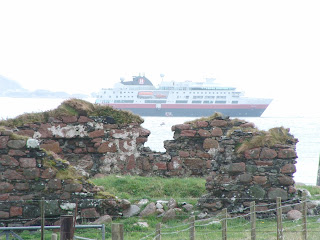 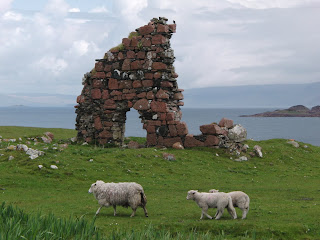 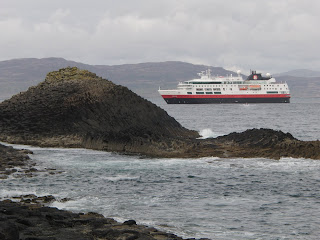 Our tender boats brought the passengers safely on shore. From the pier it was an easy walk to the Abbey, passing the ruins of the Nunnery from the 12th-13th century. The Iona Abbey, now an ecumenical church, is particular historical and religios interest to pilgrims and visitors alike. The graveyard at the Abbey is the final resting place of Scottish, Norwegian and Irish kings. The island is such a beautiful peaceful place. Marvelous!
After we left Iona at 4 pm the captain headed to the tiny island of Staffa near by. The name Staffa comes from Old Norse. It means pillar island. The sea was calm just a Again the guests were brought onshore by the tender boats. And they loved it! Staffa`s most famous feature is Finga`s Cave, a large sea cove located near the southern tip of the island. Puffin (we didn`t see any), Common shags and some Skuas normally breed on the island. On small pads we walked along the cliffs to the north tip of the island. What a wonderful walk and such a great day!

Email ThisBlogThis!Share to TwitterShare to FacebookShare to Pinterest
Photograph(s) by: Klaus Kiesewetter
Newer Post Older Post Home
Welcome to MV FRAM's Expedition Blog!
MV FRAM is the most modern expedition cruise vessel belonging to the Hurtigruten fleet, roaming polar waters and taking people to remote places where only few go. In order to give you the chance to travel with us, even if only on your computer screen, we have created this blog. Here you can see what we have seen and read what we have done.
And, maybe you will be onboard with us one day!
All About MV FRAM - here
FOLLOW US ON FACEBOOK !