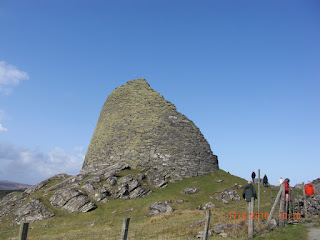 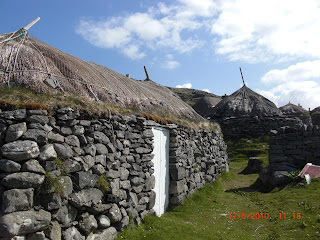 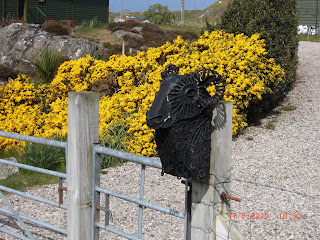 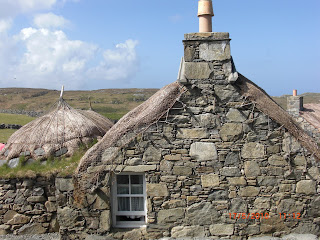 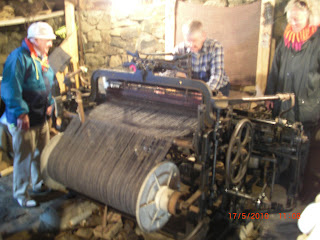 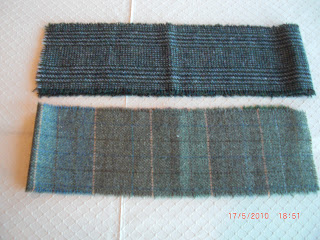 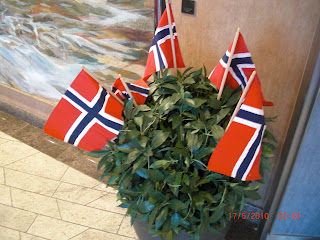 Today we celebrated the Norwegian National Day on board the MV Fram. It is an important
happening in the homeland of our ship. A big parade by the crew and guests marched along the hallways and through the entire ship with music, flags and singing the Norwegian hymn. Later on the dinning hall was opened with a big Norwegian buffet and from 10 pm Friederike presented the vegetable and icecarving-show of our philippino crew.
But we are faraway from Norway. In the morning we visited Lewis, the largest island of the
Western Isles or Outer Hebrides of Scotland. Lewis contains the only town Stornoway, and three
quaters of the population of the Western Isles. Here in Stornoway we docked and started
our excursions to the importent gaelic points of the island.
The Callanish Stones are situated near the village of Challanish. Construction of the site took place between 2900 and 2600 BC, though there were possibly earlier buildings before 3000 BC. The 13 primary stones
from a circle about 13 m in diameter, with a long approach avenue of stones to the north, and shorter
stone rows to the east, south, and west. The overall layout of the monument recalls a distorted Celtic cross.
Another importend attraction are the Black House a traditional type of house which used to be common
in the Highlands of Scotland and the Hebrides. The buildings were generally built with double wall dry-stone
walls packed with earth and wooden rafters covered with a thatch of turf with cereal straw or reed.
The floor was generally flagstones or packed earth and there was a central hearth for the fire.
There was no chimney for the smoke to escape though. Instead the smoke made its way through
the roof. The black house was used to accommodate livestock as well as people.
People lived in one end and the animals lived  in the other part with a separation between them. 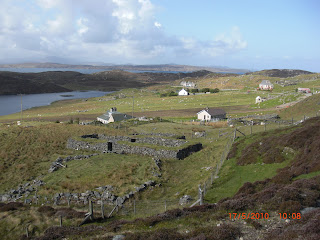 A lot sheep of different breedes crossed the narrow streets- time to talk about Harris Tweed. It is a type of tweed that is only from the Outer Hebrides.Harris Tweed is a fabric made of pure virgin wool that has been dyed and spun and was woven by hand by residents of the islands of Lewis, Harris, Uist and Barra in their homes. Tweed has been produced since ancient times in Scotland. During the time of the industrial revolution it became uneconomical to weave by hand  and Looms replaced the Loom. Only on the remote Outer Hebrides, at that time already known for the quality of their tweeds, manual production methods have been retained. But there was no time to buy the fantastic tweed products with the different colores.
So we look for shopping time tomorrow, the last port on our voyage.

Email ThisBlogThis!Share to TwitterShare to FacebookShare to Pinterest
Photograph(s) by: Benno Freidling
Newer Post Older Post Home
Welcome to MV FRAM's Expedition Blog!
MV FRAM is the most modern expedition cruise vessel belonging to the Hurtigruten fleet, roaming polar waters and taking people to remote places where only few go. In order to give you the chance to travel with us, even if only on your computer screen, we have created this blog. Here you can see what we have seen and read what we have done.
And, maybe you will be onboard with us one day!
All About MV FRAM - here
FOLLOW US ON FACEBOOK !