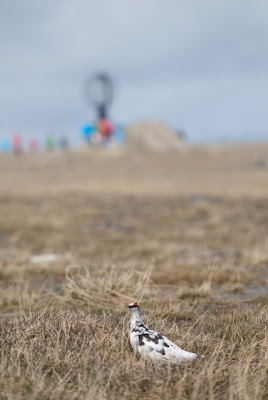 Hello there!
We are already in day three. And this monday was full of birds. Or, sorry, at first we visited Nordkapp, the northernmost place in Norway, we were told. But afterwards they told us it was a lie, because Knivskjellodden, a small spit to the left – is even further north.

It seems like it’s very important this “northernmost-thing”: The city were we disembarked, Honningsvåg, has fought for a long period with Hammerfest to be the northernmost city in the world. And our bus guide also told us about a lot of “northernmost this and the northernmost that” – and also the northernmost cat and dogs and even the northernmost American Car Club – all in Honningsvåg.
The northernmost ptarmigan? And the northernmost Chinese? Photo: Jørn Henriksen
In the morning there were some clouds, but than the nice weather came sneaking into our day – so when we reached Gjæsværtappan the sun was shining again.
– Much better than they told us, Per Martin Pettersen smiled. He was out on deck five together with his wife Gunnhild Eidsvoll, she also very smiling.
Gjæsvartappan is a group of islands in Nordkapp municipality, with Norway’s largest bird colony.
– I saw a gannet. Fantastic! And I also learned the skill between razorbill and guillemot, she said, proudly.
They are both teachers from Moelv, close to Lillehammer in Norway.
– We are so exited. I think you need both fysical and sensual experiences to understand what all this talk about climate is about, Gunnhild said. Neither of them have been to Svalbard before.
After waving good bye to Nordkapp from the ocean it was time for education. Olav Orheim, former director of the Norwegian Polar Institute talked about what happens with the climate in the Arctic. The famous german climate researcher Mojib Latif talked about “Why the polar bear needs a refrigerator”. And now, outside: Only ocean, ocean, ocean, grey, black, white, beautiful.