What a amazing morning. The last day of  our Event-Cruise  was a highlight pure. Nyksund, the old
fishing community that came to fame when it was so abruptly depopulated. The houses cling on the
rock knolls around the harbour. 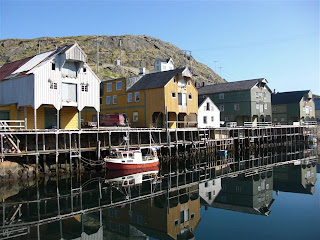 Red, greeen an grey wharf buildings are clustered together, their paint peeling. More than a few are one the verge of total disintegration. Inside the village itself, all is eerily calm-even on a fine summers day, like in the beautiful morning today. 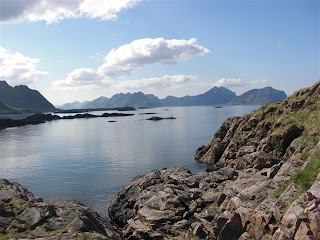 Finally, there is some activity, as tourists of different nationalities amble betweeen the wharfs and houses with their cameras ready to captures images of this former ghost town. This are also the pictures on the day when all passengers of MV Fram qonquer Nyksund. The condition of the village bears witness to this-during the hectic tourist season, there is a melancoly undertone always present. And in the end of our walking through Nyksund there was a surprise for our passengers. 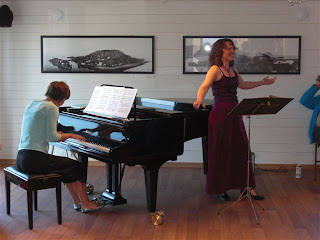 There was a classical concert in the museum, a former storehouse on the harbourside. Music from Debussy, Hugo Wolf, Arvid Hansen and Edvard Grieg with norwegians artists-Marit Nygård (Piano) and Synne Meland (Songs). A unique athmosphere on this historical place.


After leaving Nyksund we headed for the Vesteralen Islands. To the West the island of Andoya there is a little rock called Bleikoya, which is home to tens of thousands of seabirds. Kittywakes, cormorants, alks, puffins, skuas and sea eagles were observed in great flocks turning around Bleikoya and feeding right offshore. However, because of the rocky approach, we couldn't get as close as at Runde. 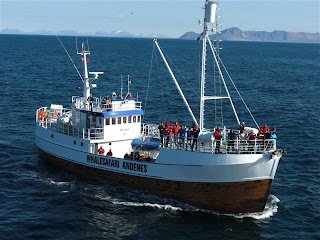 So in the end we headed North-Northwest for the deep sea canyon off Andenes. This is where the male sperm whales dive to the sea floor, as deep as 1.000 metres below the surface, to catch squid, their preferred food. Their females prefer warmer temperatures of more than 15 degrees C and stay in the Carribbean, around the Azores, Madeira or off the Canary Islands. Shortly before reaching the canyon, the helmsman exclaimed "there she blows!". 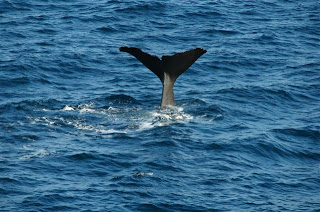 We joined the whale-watching vessel from Andenes, MS Reine, which is equipped with an under- water microphone and via radio channel 16 were informed when strong clicks were heard, indicating a surfacing whale. We were verz lucky: our first whale surfaced right in front of us at 1 o'clock from our course, heading for us. After breathing about 30 times, the head of the whale came higher up, the animal took one last breath and then curved its back: "diving!". Then the fluke came up as the whale headed down for another vertical dive. Everybody took a photo of the tail, which for sperm whales is like a fingerprint. We will be able to identify the animal from the Andenes sperm whale catalogue. 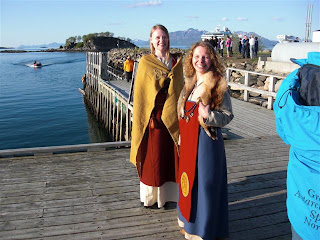 The day ended in Bjarkoya, the settlement of the Viking Thore Hund, where we were met by real vikings and their families.

Email ThisBlogThis!Share to TwitterShare to FacebookShare to Pinterest
Photograph(s) by: Benno Freidling, Boris Culik
Newer Post Older Post Home
Welcome to MV FRAM's Expedition Blog!
MV FRAM is the most modern expedition cruise vessel belonging to the Hurtigruten fleet, roaming polar waters and taking people to remote places where only few go. In order to give you the chance to travel with us, even if only on your computer screen, we have created this blog. Here you can see what we have seen and read what we have done.
And, maybe you will be onboard with us one day!
All About MV FRAM - here
FOLLOW US ON FACEBOOK !