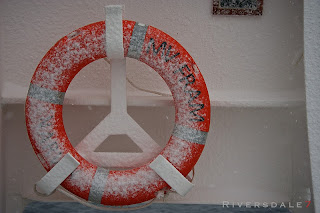 Today is the big day – and do we know that on board MS Fram! 14th December 2011 marks the centennial of Amundsen’s party reaching the South Pole, and they travelled to Antarctica on board the famous vessel Fram, afterwhich our ship is proudly named. And trying to follow the famous explorer’s steps, we pursued our southward journey today. 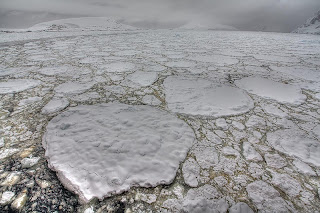 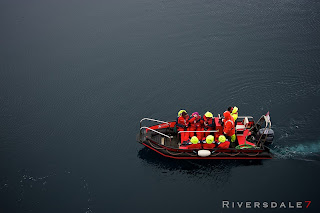 First thing in the morning, we sailed through the Lemaire Channel, which was hiding itself with fog and rain, both of which luckily vanished by the time we came out the southern end. And we were then greeted by a spectacular, truly Antarctic scenery most befitting to today’s date: the sea in front of us was covered in pack ice, and as we sailed on in our southerly journey, the buttery aspect of soft ice –seawater just beginning to freeze– met us, and a bit later we came across beautiful pancake ice –the next step in the formation of pack ice. On the ice itself, we were very happy to see some resting seals, including Weddell, crabeater and leopard seals. 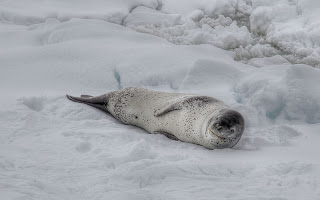 Captain Hårvig decided to make good use of our solid, ice-class hull by carefully navigating through the ice floe labyrinth, and making it to the southernmost point of our trip, just shy of Petermann Island: 65° 11’ S, 64° 10’ W. Not quite the 90° S required to reach the South Pole, but we are all very happy to be here today, and had the following picture taken to celebrate the occasion and as a humble tribute to the great explorers of years gone by. 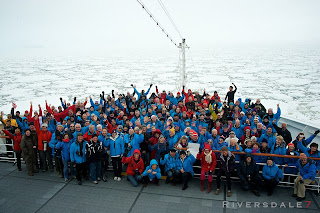 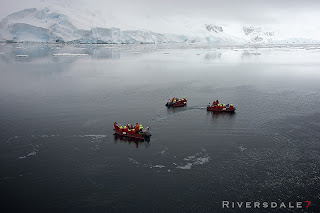 Having left the ice maze, we spent the best part of today taking our guests to have a closer look at the ice, on board our maneuverable PolarCirkel boats. We also spent the best part of the day trying to get a closer look at a group of orcas that were spotted around the vessel at various times – and did not really succeed, but looking for them between the floating ice, against the background of glaciers cascading down the mountains all the way down to the calm seas was fabulous!