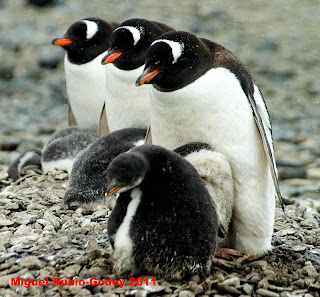 A desperate crew seeking shelter two weeks after losing their ship on the dangerous waters of the Weddell Sea are probably not in the appropriate mood to appreciate the beauty of the scenery. But Captain Larsen and his men really hit the spot when they overwintered at Paulet Island, off the south entrance of the Antarctic Sound. Today, MV Fram has sailed the same waters named after Larsen’s ship, the Antarctic, giving everyone onboard the chance to enjoy one of the most beautiful landscapes of the Antarctic Peninsula. 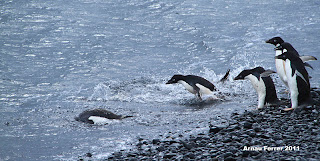 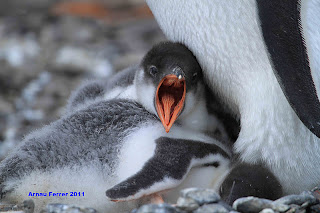 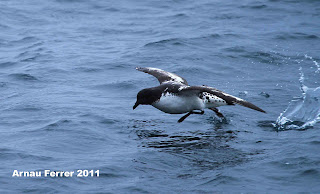 Early on the morning we landed at Brown Bluff, a volcanic and impressive outcrop on the western shore of the Antarctic Sound, at Antarctica mainland. Fantasy shaped brown and yellowish rocks fallen from the cliff and spread all over a long pebble beach set amongst two glaciers house a large Adelie penguin rookery and few hundred pairs of nesting Gentoos. Chicks of both Adelie and Gentoo became the preferred target of all the photographers ashore. Some, though, after warming up climbing the moraine for an aerial view of the area, opted to cool down on the icy waters of Antarctica! 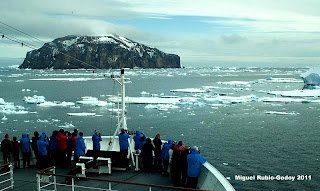 Hundreds of icebergs of all shapes, sizes and colors dotted the course of MV Fram on its way to Paulet Island. Clear skies and ideal conditions for photography on the approach to the island allowed everyone onboard to enjoy an impressive panoramic view of the place where the Norwegian crew overwintered in 1903. Swell was too big for a safe landing operation and the captain decided instead to spend the rest of the afternoon cruising slowly between the ice choked waters of the sound. As everyone on the outer decks agreed, the magnificent views of such mighty icebergs so close to the MV Fram were exactly what they expected Antarctica to be. 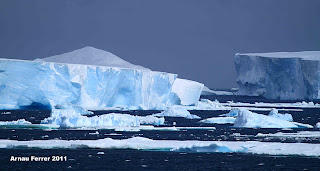 Tonight we will celebrate New Year’s Eve on the waters of the Bransfield Strait with the satisfaction of having successfully landed on the coldest, windiest, driest and most isolated continent on Earth. Antarctica, for us, is no longer terra incognita…