Options are what big cities offer and options are what we got today in Port Stanley, were we docked safely this morning after sailing carefully through the very narrow passage that leads into the inner harbour of Port William. Rusty hulls and wooden carcasses of old wrecks reminded everybody that the safe waters of this perfect natural harbour have long been the last resting place of many boats paying their tribute to the Southern Ocean. 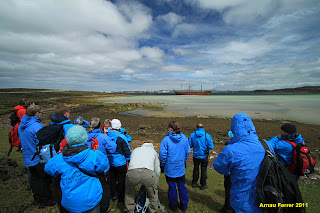 A few opted for an historical tour of the old settlement of Port Stanley, stopping at the spectacular wreckage of the Lady Elizabeth, photographing the odd signpost with directions and distances to almost any point in the World, learning the complex history of the archipelago at the local museum and remembering the tragic events of 1982 at the Falklands War Memorial. 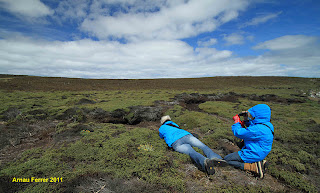 Others signed up for a natural history walk along the northern shores of Port William, starting at the Lady Elizabeth wreckage, passing Engineer Point and ending up at the spectacular beach of Gipsy Cove. Tips of local history, botany and birding were provided by a knowledgeable local guide, with highlights like the historic scurvy grass, a small colony of Magellanic penguins, remains of the Second World War and a rookery of cormorants and night herons.
And some made it to Bluff Cove Lagoon, where they could see half a dozen king penguins reigning over several hundred Gentoo penguins. An interesting sight in the colony was a leucistic penguin: an animal with reduced pigmentation, which unlike albinos, have several reduced skin pigments, not just melanin. The ride to the colony was beautiful: a drive alongside the rocky spine of East Falkland Island. 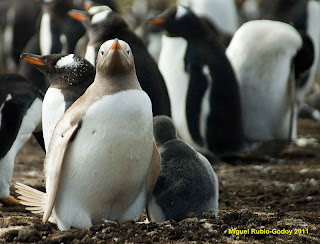 Eventually, everybody ended up in the city center, shopping around, strolling along Ross Road, relaxing at Victory Green, guessing the size of big whales from the jawbones in front of Christ Church and even walking as far as Government House, Battle Memorial or the local museum. 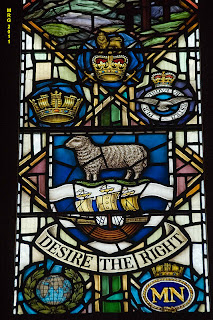 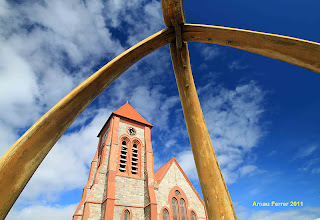