Sailing through a rainforest!

World looked well again after a long sleep. Most of the passengers had been overtired when they arrived yesterday after their very long flights. MV FRAM was sailing through the Beagle Channel during the night and the soft movement of the vessel let us sleep like a baby in a cradle.

We cruised in the “Canal Cockburn” already in the morning when we went for our first breakfast of the trip. The landscape looked amazing. The hills have been soft shaped as they have been eroded by the glaciers during the last ice age, more than 10.000 years ago. Some of them even had no vegetation, they looked really grey polished.
Later on the rocks were covered with the South Chilean Beech forest. As this forest is a rain forest - in some regions of the Chilean Fjords we have more than 6.000mm of rain during the year - it is no wonder that we had deep hanging clouds and a little bit of rain. In the background we could see the snow covered Mountains. 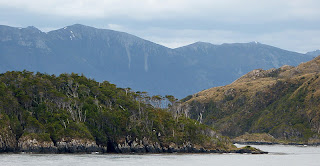 The sharper Peaks have never been covered with ice, even not during the ice age. These so called “Nunataker” have been exposed above the former ice shield. 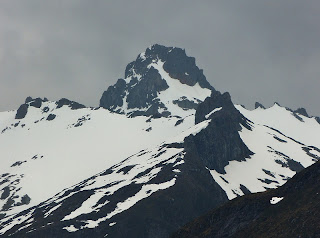 During lunchtime we sailed through the “Seno Magdalena” into the “Estrecho de Magallanes”. The wind blew up so that we had white crowns on the waves. At this moment we got the first impression what it means to be on a ship. 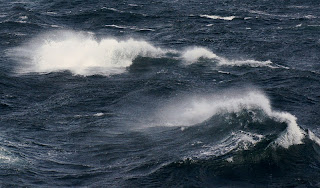 Already during the morning we started our lecture series focused on Patagonia and Tierra del Fuego. After a short rest during lunch the lecturers tried again to make Patagonian specialists out of us. But of course we wanted to be best prepared for our landings in this region. 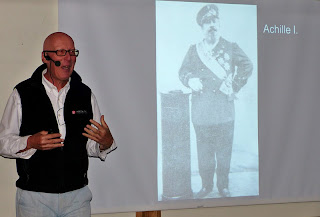 Around 6pm we went alongside in Punta Arenas. The wind was very strong at this time, but the wind had blown the clouds away so that we had blue sky with sunshine at least in the evening. After the ship has been cleared into Chile by the officinals first those passengers, who booked the Torres del Paine tour had to leave the ship. Shortly afterwards all passengers could leave the vessel to enjoy Punta Arenas at night.