It was 10.29 a.m.when we crossed the Artic Circle, a short time before we arrived Sisimiut. It is the second largest "city" in Greenland, with 5.350 inhabitants. 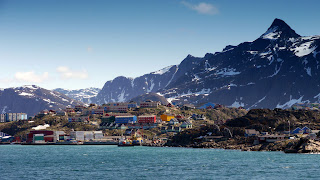 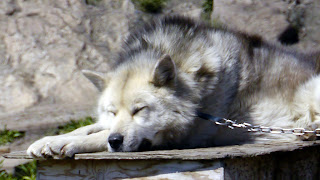 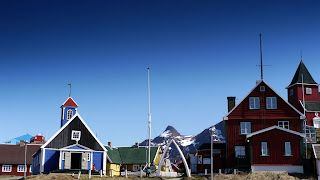 Today we learned that Sisimut is the southernmost town in Greenland with true sleed dogs. Sisimiut is today a modern town. Many people from smaller villages moved to Sisimiut years ago, because at the benefits of living in a larger  community - a lots also abandoning their old houses. The surrounding scenery is impressive with steep rocky cliffs rising straight up from the sea. 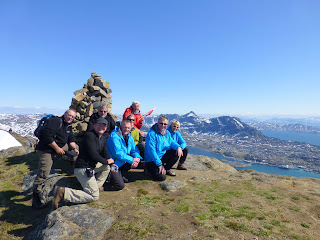 There were lots things do in town such as visiting the excellent museum and spending our money in the various shops including the excellent craft workshops by the harbourside. But the weather was also excellent for our hiking tours. So many of us joined the historical walking tour to Tele Island.
Then the hike to Priesters Mountain near Sisimiut was undoubtedly the hardest hike of this fantastic cruise. The view after two hours of steep hiking was breathtaking and we had a beautiful view towards the alpine fog. It was a proud group returning to the ship after almost five hours in the Greenlandic mountainlandscape.

A very interesting excursion was the boat trip to the abandoned village Assaqutaq. This place was established in the 1920`s but in the 1960`s the population began to decrease. The village officially closed in 1969. Now  it is a ghost town. Today the settlement is used as summer camp or the local public schools and is in June a busy place where the inhabitants from Sisimiut go fishing for the capelin.

Some of our guests used the possibility in Sisimiut to get a little impression of Grenlandic food. The excellent kitchen in the "Hotel Sisimiut" prepared a very special buffet for the passengers. Everybody enjoyed all the specialities like rendeer, muskox, lamb, dried cod and catfish, shrimps, crabs,scallobs
and even more. 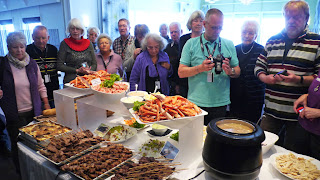 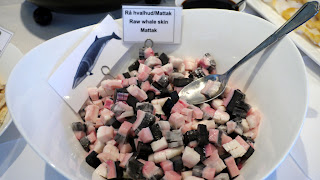 Just before departing the key we were treated to an extraordinary display of kayaking prowess. We all shivered as we watched Elias and Emaanooraq roll the kayaks gain and again in the frigid polar waters of Sisimiut harbour.

It was a real interesting day and final ending was the amazing ice and fruit carving by members of the kitchen in the Observation Lounge.

Email ThisBlogThis!Share to TwitterShare to FacebookShare to Pinterest
Photograph(s) by: Barbara Schoog and Klaus Kiesewetter, Marko Krause
Newer Post Older Post Home
Welcome to MV FRAM's Expedition Blog!
MV FRAM is the most modern expedition cruise vessel belonging to the Hurtigruten fleet, roaming polar waters and taking people to remote places where only few go. In order to give you the chance to travel with us, even if only on your computer screen, we have created this blog. Here you can see what we have seen and read what we have done.
And, maybe you will be onboard with us one day!
All About MV FRAM - here
FOLLOW US ON FACEBOOK !