What an amazing day in Iceland. The island is not well known for a stable climate but during this week was sunshine every day. 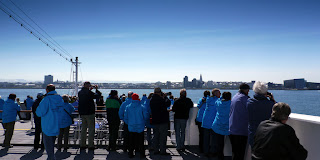 Some of us waked up quite early and enjoyed the blue sky and the blue ocean. In the morning there were some information given about Reykjavík and the excursions. But most of the time the passengers loved to be on deck and look to the coastline. First we saw Reykjanes and later the capital Reykjavík with its landmark, the church Hallgrímskirkja. Our position at the peer was close to downtown and some of us used the time to hurry to the church and the conference- and concert hall Harpa. Harpa was opened last year and is an impressive building with its walls of glass designed by the international well known Danish-Icelandic artist Olafur Eliasson. 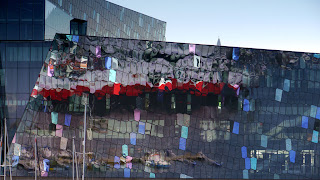 A group of 20 joined Sabine for a city-trip through the old part of Reykjavík, passing the oldest Grammar school in Iceland, the Parliament and some excavations. But the best of all was the sunshine!

In the afternoon most of the passengers started for a trip like the “Golden Circle”, which includes three of the best highlights in Iceland quite close to Reykjavík. First is the old place Thingvellir, historical very important and also from the geological point of view. The next stop is Geysir were they saw the famous Strokur which erupts nearly every eight minutes and in the end the beautiful waterfall Gullfoss which means the Golden Waterfall. Another group of the passengers joined the trip “Ring of Fire” going to a new geothermic power station, to the garden-town Hveragerdi and later also to Thingvellir. And the last trip was an exciting ride in 4x4 Super jeeps, a special car in Iceland with huge tires. It is surprising to see where they can still drive. 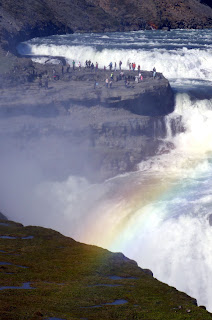 Unfortunately we had to leave Iceland quite early at 9 pm, but perhaps some of us will come back to Iceland one day. 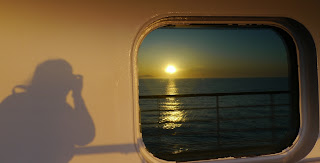