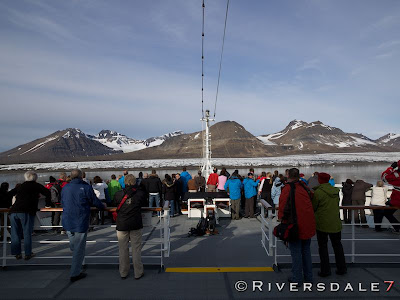 Our first full day in Spitsbergen could not have been better.

There is little doubt that the biggest draw to Spitsbergen is the Arctic ikon, the Polar Bear.  There is something very special about Ursus Maritimus.  Perhaps it is the combination of beauty and cold deadly power. Whatever it is, an announcement of a Polar Bear will bring people out on deck in droves and that is exactly what happened at 09:30.  A female polar bear was spotted swimming and as luck would have it she was quite close to the ship.

The bear swam the approximately 200 metres to shore where upon it stood and shook off the excess water.  We knew it was a female Polar Bear because of the collar she was wearing.  Only females are tagged with radio collars.  The neck of male bears is wider than the head.  If a male is tagged, the collar will eventually come off.

We carry on board FRam several hundred pairs of Muck Boots which we make available to our guests on a renatl basis.  The boots are inexpensive to rent and are the best foot wear to have for Polar Expedition cruising.   At 10:00 the Expedition Team set up two boot rental shops where everyone could be fitted for a pair of boots.  Just about everyone availed themselves of a pair of boots.

We also had lots of time for our mandatory AECO briefings where everyone is informed of proper comportment while travelling with us in the Arctic.  It is also the time where people are briefed on exactly how Polar Cirkel boat operations will operate.
During all of this on board activity we were also cruising through some outrageous Arctic landscapes!

At 11:30 we were invited to the Observation Lounge where we met the Captain, Arild Harvik.  The Captain introduced the ship’s officers and many key members of Fram including the entire Expedition Team.

And that was just the morning.
At 14:00 we dropped anchor at Gnålodden.  The expedition team went on shore first to check the area for polar Bears. At 14:30 the Polar Cirkel boats began shuttling everyone on shore.

The backdrop for our landing was the tall, impressive peak of Gnålodden mountain.
The strident calls of thousands and thousands of Kittiwakes filled the air as they prepared to leave their nesting sites until next summer.  There were also hundreds of Northern Fulmars, Glaucous Gulls, lots of Black Guillemots, several Parasitic Jaegers and at least 1 Great Skua as well as female Eider Ducks with ducklings,

At 18:00, the last Polar Cirkel boat left shore.  We headed out to sea where we followed a steep drop off as we knew from past experience that this was a good location for spotting whales.
At 22:30, three fin whales were spotted as well as several humpback whales. 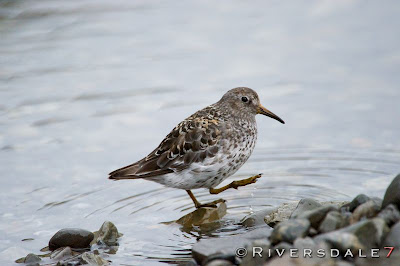