It is now day three of our Arctic escapades.  The scenery in Liefdefjorden surpasses our expectations.   Glaciers tumble down to the ocean on three sides of the ship.  Ragged mountains in sombre tones clutch at the glacial ice as it struggles to flow to the sea.  Fram is surrounded by heavy brash ice  that has calved off the front of Monaco Glacier.  The wind is less than 5 knots and variable.  Everywhere you look lies a postcard in waiting.
Our plan this morning was to sortie in the Polar Cirkel boats and cruise through the brash ice.  At first it was heavy going as the ice was thickest at the ship.  It took about ten minutes to arrive near the front of Monaco Glacier.  The lucky people in the first two boats were graced with a pod of Beluga Whales.  We could see two calves sticking close by to their mothers in a group of approximately ten whales.   The whales seemed to be feeding right at the base of the glacier.  Monaco was calving a lot today.  Large blocks of ice landed perilously close to the whales.    The Belugas continued their way west along the glacier front where Polar Cirkel boats didn’t dare to go.

We continued east along the glacier front encountering hundreds of Glaucous Gulls, Kittiwakes and Fulmars.  Parasitic Jeagers (Arctic Skuas) patrolled the sky looking for unwary seabirds making a catch of fish.  As soon as they spotted a Gull with a fresh fish, a chase would ensue with the result usually being that the gull dropped their meal and the Jaeger would catch its breakfast in mid air.

In the afternoon we landed at Mushamna.  There is a beautiful hunter’s cabin there.  It is possible to over winter as the cabin is in very good condition.  Each year there is a different tenant as qualified people need to apply to the Governor of Svalbard.  Tenancy is for one year only with a possibility to extend for a year, however Mushamna has been empty for the past three years.
It is very easy terrain in which to walk around.  We were free to explore the area around the cabin and to go much further afield.  The Expedition Team was, as usual, keeping a watchful eye out for Polar Bears.
There was also the opportunity to go on a two and a half hour hike.  The hike wound through a gorgeous valley with steep mountains rising abruptly on three sides.  Inside the valley you couldn’t hear a sound.  There wasn’t any wind.  No birds calling.  No engine noise from the ship or Polar Cirkel boats.  None of the noise associated with the trappings of a modern society. It was  truly serene. 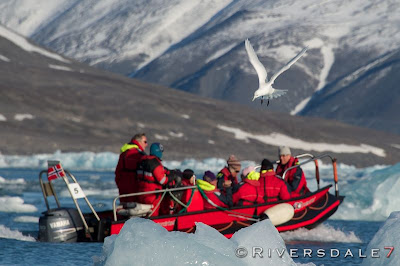 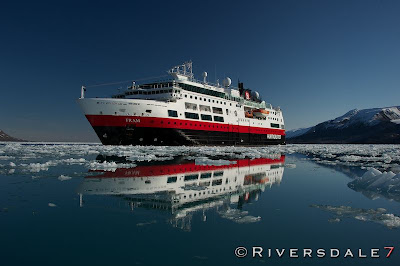 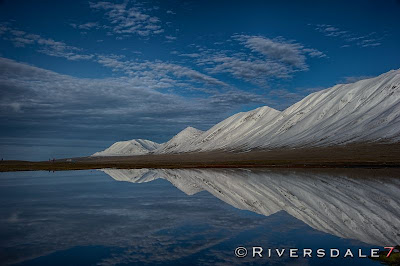 The last of the hikers returned to the ship at approximately 20:15.  Soon after Fram was on her way to Moffen Island where we hoped to see Walrus.    At about 22:30 we crossed N80˚ and could plainly see a group of Walrus huddled together just up from the beach.  Fram stood about three hundred metres off shore where we had excellent views of these unique marine mammals.