This morning’s landing started at 09:30.  The skies were completely overcast and there was a threat of rain in the air.   A damp wind gusted over the mountain, down the hills and across the verdant fields at the base of Alkehornet.  A herd of Reindeer grazed placidly, impervious to the biting wind. 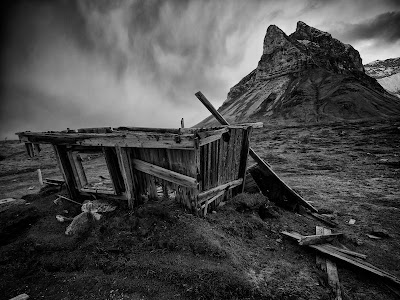 The Reindeer here are habituated to ship-born visitors.  They tolerated our presence to a degree but as more and more people advanced across the plain, they slowly moved to quieter pastures.
Traversing a broad expanse of grass and moss, we could see the scattered red dots of the Expedition Team marking the huge perimeter of the landing site.
Amongst other wildlife, Alkehornet has a resident population of Arctic Foxes.  We never fail to see at least two or three.  There are plenty of places for the foxes to den and a very large colony of seabirds including Kittiwakes, Fulmars and Black Guillemots provides a ready food supply for the foxes in the spring and summer months. 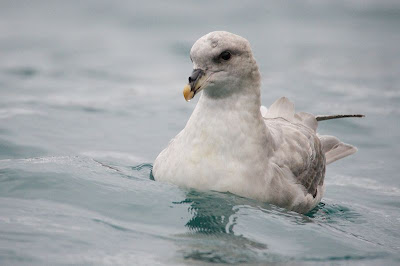 Kittiwakes and Fulmars circled high up on the cliff tops.  We could hear the Kittiwakes calling out their name, “Kittiwake!  Kitti-wa-ake!”  But now they were very few compared to previous weeks.  Most of the chicks have fledged. The majority have already headed out to sea, not to return until they are of an age to breed and raise chicks of their own.

At 13:00 the last people left the beach and Fram readied to move towards the next landing site at Skansebukta.

At 15:00 we joined the Captain, Officers, Crew and Expedition Team in the Observation lounge for the Captain’s traditional farewell speech.  Following the speech, the crew sang a touching farewell song that was written specifically for MV Fram.
And then at 15:30, the Expedition Team hosted a charity auction. The funds of the auction go to support worthy students wishing to attend the Arctic Guiding program in Longyearbyen and other Arctic environmental concerns. 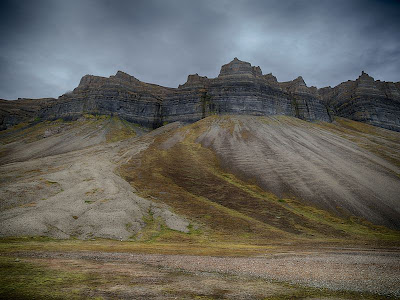 Skansebukta.  The last landing of our Arctic holiday.    One person confided that the last landing was very sad.  Ah, but that’s a good thing isn’t it?  If we weren’t sad to leave then that would mean that it wasn’t a great trip.  So a little bit of sadness is good. 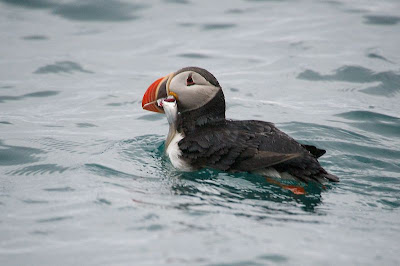 Puffins whirred their way back and forth along the soaring cliffs of Skansebukta.  Occasionally you could see that one of these endearing sea birds had a beak full of fish.  With the aid of binoculars you could spot Puffins and Fulmars sitting on cliff ledges. 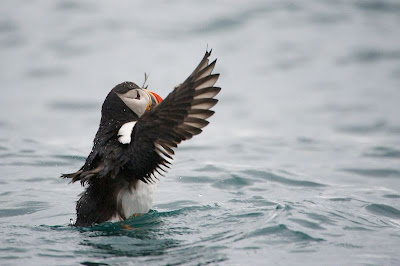 Many people took the last opportunity to wear off some of the calories they had accumulated in the dining room by hiking up a very steep hill to a beautiful waterfall at the base of the cliff.  The view from the top was truly inspiring
Upon arrival at the lofty waterfall, two brave souls cast off all of their garments and took a shower in the glacial water at the top of the world.

All too soon the final landing of our Arctic adventure was over.  Arrival day in Longyearbyen seems so long ago.  It seems like we packed a summer of experience into one week.  It will take some time for many of us to review our photos and to reflect back on everything we have done.  One thing is for sure, we all have unforgettable memories of our voyage in the high Arctic.