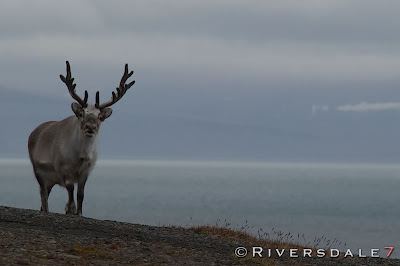 It has been a brisk pace.  We have already seen and done a lot.  It seems as if every day is full.  Our list of charismatic mega fauna is impressive.  Let’s pause for review.  In four long days (Or is it one continuous day? After all, the sun never sets.) we have seen the magnificent Blue Whale, Humpback and Beluga Whales, Walrus, Harbour and Bearded Seals, herds of Reindeer and while we don’t suggest that the diminutive Arctic Fox can be described as mega fauna, we have seen many foxes.  We have also seen thousands of sea birds including Puffins and Ivory Gulls.

There is one animal that we are missing.  I don’t dare mention its name lest I be the jinx.  It is large.  It is white and it is the apex land predator in the Arctic.  It can definitely be classed as charismatic quadripedal mega fauna.

Optimism is high and we have plenty of time, but you can see people beginning to walk around with crossed fingers.
This morning we had time for a leisurely breakfast as our first landing was scheduled for 10:30.  It was a treat to sleep in if so inclined.

We landed at Kapp Lee on Edgeøya. It is well known as a favoured Walrus haul-out site.  There were no toothy pinnipeds on the beach, but soon a group of three emerged from the sea and seemed curious about the group of people ooohing and aaahing on the water’s edge. The walrus came within15 metres and then leisurely made their way to the far end of the bay.

Meanwhile a group of hikers set off to climb to the very impressive cliffs tops of Kapp Lee.  The Expedition Team set out flags from the landing site and cautioned everyone of the necessity to stay on the marked trail.  There was a very real danger of getting stuck in deep, sucking mud and to not be able to extricate oneself. Despite the warnings, people wandered off the trail.  More than one person found themselves needing assistance  to free themselves from a clay quagmire.

By 14:00 everyone was back on Fram.  We scheduled several lectures for the afternoon.  There was ample time to attend a lecture or visit the gym, or luxuriate in the sauna, or jacuzzi.
At 21:45 we were all invited to the Observation Lounge where some of the hip’s officers and the Expedition Team modeled apparel from the gift shop. 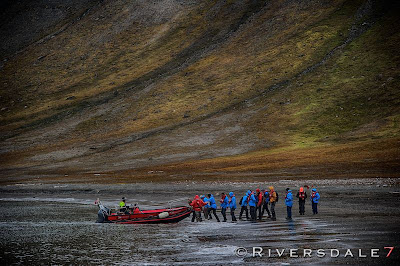