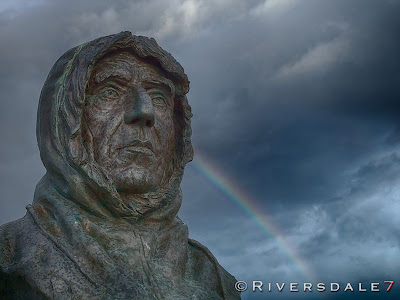 This morning we met in language groups on the quay in Ny Ålesund.  Once everyone was assembled, the Expedition Team led us on a tour of one of the very most northerly settlements in the world.  The wind ripped down from Kongsbreen and Kongsvegen glaciers. It picked up sea spray as it tore along Kongsfjorden and then nagged and pushed and shoved us through the small settlement.


This was definitely not a day for launching zeppelins but the Expedition Team told us of the historic moment in 1926 when Roald Amundsen, Lincoln Ellsworth and Umberto Nobile did that very thing.  The first flight over the north pole  embarked from this very spot.  At the time it was the most newsworthy event in the world.
We walked out to the 30 m tall mast from which Amundsen and Nobile launched their zeppelins 87 and 85 years ago respectively.
After the walk we had the option of picking up Arctic souvenirs in the gift shop or to explore the museum and information centre or to just kick about town on our own..

Just before 12:00 we cast off our lines and were treated to some scenic cruising deep in Kongsfjorden.  We then headed north west, exiting Kingsfjorden and made our way towards Magdalena Fjord.  We weren’t due to land at Graveneset until 17:30 but we had plenty of activities scheduled in the afternoon.
Starting promptly at 12:00 we offered everyone the chance to try on a pair of our sturdy, warm and waterproof Muck Boots.  We have the boots available for rewnt and it seemed that just about everyone decided that the Muck Boots would be a good idea.
AECO briefings were scheduled throughout the afternoon and there was even time for a couple of lectures. 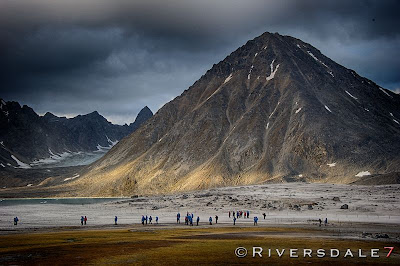 At 15:00 wer were invited to the Observation Lounge for the Captains Welcome speech and cocktail.  We were introduced to key members of the ship including many of the officers and the entire Expedition Team.. For some inexplicable reason the chef got the largest round of applause.  Come to think of it, he gets the most applause every week. 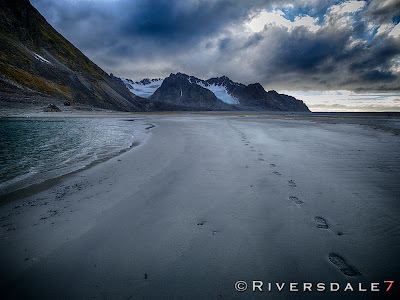 17:30 we landed at Gravneset in Magdalena Bay. The wind from the morning had not abated but our anchorage was sheltered providing excellent conditions for Polar Cirkel boat operations. The first people on shore were all of those wanting to go on a hike to Gullybreen Galcier at the head of Gullybukta.  By the way, saying or writing Gullybreen glacier is a bit redundant as breen means glacier in Norwegian.  Kinda like saying Gully glacier glacier. 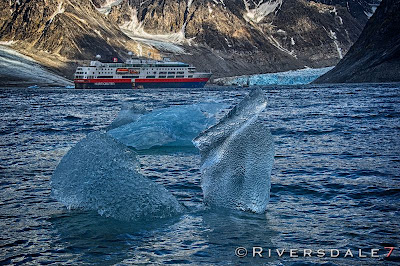 While the seas were calm at our anchorage the wind continued to ravage us on shore. Willywaws picked up sand and sea alike and spun like mini tornados over the landing site. 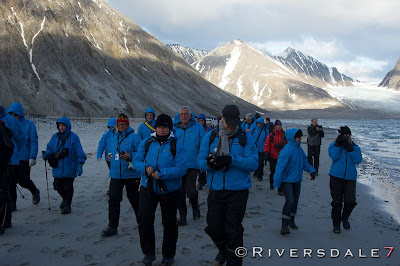 Despite the wind, numerous people braved the icy water and went for a swim.  To say they went swimming is perhaps a bit generous as for most it was a very hasty in and an even hastier out. Nevertheless, we give credit where credit is due.  Everyone that braved the frigid sea will get a certificate signed by the Captain testifying as to the date and location of their plunge.

By 20:45 everyone was back within the warm and windless confines of the ship.