This morning we landed on Kinnvika, a place on 80° N with a lot of research history! The Swedes and the Finns built up this large research facility for the International Geophysical Year 1957-1958. We explored some of the houses and were impressed, how well everything is still in shape where the researchers carried out their science projects in meteorology, Northern Lights, earth magnetism and more! 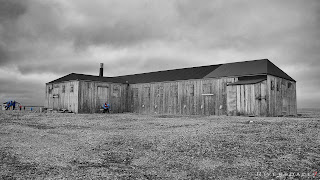 Some of us went up the hill and had a great view over the tundra. Back on MV Fram we sailed on Hinlopen Strait and visited on our way Alkefjellet, an over 100m high imposing dolerite cliff with hundreds of birds. Some Brunnich’s Guillemots were still around, but mostly Kittiwakes were flying in and out of the nests with a “Million Dollar view”. 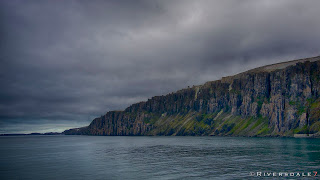 In the afternoon Tom held a lecture about the lord of the Arctic – the Polar Bear and got rid of many myths about this majestic animal, while Frieda was telling us about the seabirds flying around on Svalbard. The evening landing was on Torellneset where we first spotted a skeleton of a walrus. It was obvious that a polar bear had fed on it, as there were only bones and skin left but most of all, we had some polar bear footprints around the “corpus delicti”! Luckily we met also some “alive” walruses, lying on the beach and digesting. Some of them decided to take a bath and one was even swimming quite closely towards us! But all at a sudden, Manuel spread the word – “Polar Bear in sight”! Far away there was a yellow dot on the tundra – was it the polar bear who fed on the walrus? No one knows, so we kept on watching the walruses, before it was time to head back to the Polar Cirkel boats. What an exciting day! 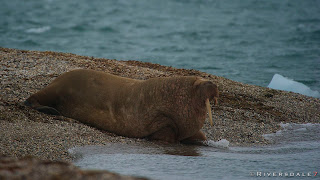 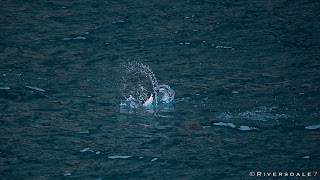