After a day of lovely sunny weather we again woke up to rain and fog. At 07:00 we reached 80N and Moffen Island. This small island is a haul-out place for Walrus, and we saw two big groups sleeping on the beach. This is a nature reserve and we must keep a distance of 300 meters from the island.  During the morning the wind increased and we experience wind up to 21 m/s or 41 knots. White caps were everywhere,  make landing in the polar circle boats too dangerous. The Artic summer weather is unpredictable. Our first landing, which was supposed to be in Kinnvika, was unfortunately cancelled. In Kinnvika are ten buildings from the Swedish-Finnish research expedition during the International Geophysical Year 1957-1958. This was the greatest international scientific effort the world had seen to date. We could see the buildings as we passed by. 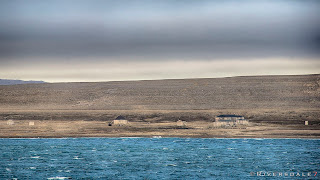 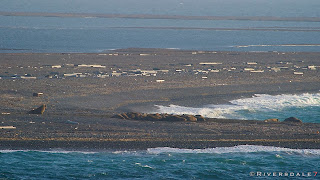 At 14:00 we sailed passed the impressive Alkefjellet where 300 pairs of Brünnich's Guillemots (Murres) nest during the summer. We could see many on the water and some up in the cliffs. Manuel could told us about their way of living and that the whole colony is quite synchronize and all the chic’s would leave the nest on almost the same day! 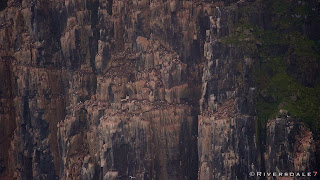 We continued our travel towards Torellneset, where we hoped to have a landing and maybe have a closer look on the walrus that often rest here. The weather was still bad, and landing too dangerous. Safety first! Even the walruses had taken a hint and had disappeared from the beach. 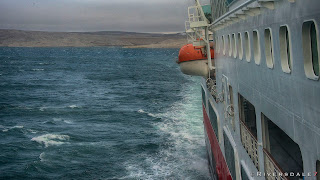 We enjoyed the day inside Fram, enjoying lectures about glaciers, polar bears and the historical FRAM expedition in 1893-1896. I imagine those guys also experienced all kinds of arctic summer weather!