Ohhh what a beautiful voyage, it blew me away

This was the first time for Fram to do a landing in Ymerbukta. We got a panoramic view of the glacier Esmarkbreen and the most adventures ones also had a short walk on the glacier. It was interesting to have a close look at the crevasses and melting water channels. Some of us got some great pictures of the big calving. Some birds we haven’t seen before on this trip showed up; scooters, purple sandpiper and eider ducks. Manuel the bird man and his disciples were of course ecstatic. 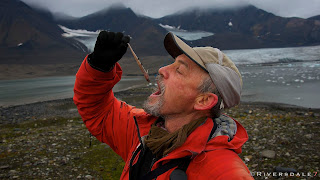 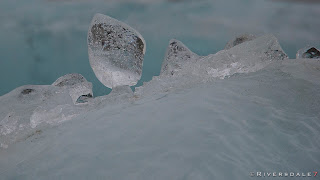 In the observation lounge onboard it was time for the Captains farewell speech. We had some rainy days, sunny days, spotted 6 polar bears, many walrus, birds, walked on glaciers and hiked in the beautiful Spitsbergen landscape. Everybody could therefore join the crew when they sang “Oh what a beautiful voyage”. The song was written by Tore Sivertsen, a Hurtigruten employee working on one of the ships sailing on the Norwegian coast.

There was still one more landing to enjoy though. We landed on the beach in front of the Nordenskiold glacier and walked along the beach to Brucebyen. Translated to English this means Bruce`s town. This town consists of 3 houses and one outdoor toilet. The town is named after the Scottish oceanographer and scientist William Spiers Bruce. He came to Svalbard the first time in 1898 when he joined the expedition of Prince Albert of Monaco. Later he established The Scottish Syndicate Company and hoped to find coal deposits of commercial value. Brucebyen was built in 1919 as a base for the company`s coal exploration in the area. Today one of the houses is used as duty cabin by the Governor of Svalbard. A couple of years ago the cabin burned down, but has now been rebuilt in the same style as the other huts. The cultural heritage is important on Svalbard to enable us visitors to relive the Klondike feeling that existed on Svalbard. It was still time for a final glacier cruise in front of Nordenskiold glacier before we headed back on board. 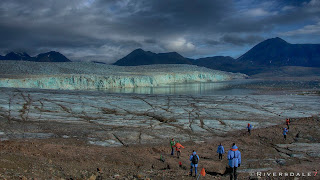 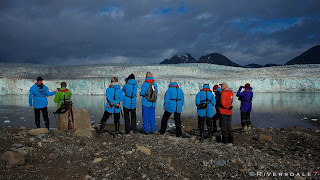