This morning we visited Ny Ålesund, one of the northernmost communities in the world.  At 08:30 we began to assemble in language groups on the pier.  It was a pleasant relief to have the sun beaming down upon us. Still, it was a chilly morning at about 2ºC. There was a fresh blanket of snow covering all of the mountain peaks. August 11 and Old Man Winter was already waking up.   Soon enough we lead on a walk through the small but fascinating town. As we strolled about town, the Expedition Team told us stories of tragedy and death and stories of grand adventure. The town was built for coal mining.  Over the years there were many accidents the last of which was in 1962 when 21 miners died in a methane explosion. After that the mine was shut down. In the years that followed that tragic event, Ny Ålesund has enjoyed a history of Arctic science and research. As many as 15 nations conduct research here annually. 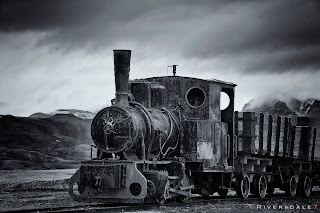 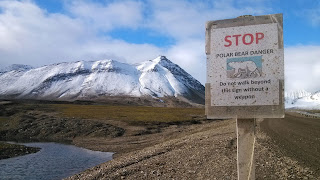 After the guided walk, many people took the opportunity to send post cards. It is unlikely that their friends and family will ever receive another piece of mail from such a northerly destination. There was ample time to explore Ny Ålesund, whether it be a visit to the  gift shop or just wandering about on your own.

By 11:45 everyone that went into Ny Ålesund was back on the ship. Fram cast off her lines and moved slowly into Kongsfjord. Fram positioned where we could more expeditiously retrieve the last of the hikers at Conway Glacier as well as the kayakers. By about 13:30 everyone was back on board and we were on our way once again. 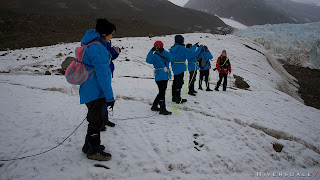 As we approached Fjortende Julibukta our intended landing site for the afternoon, it bacame apparent that there was too much wind and too much wave action at the beach to make a safe landing.  The decision was made to abort the landing here and move on to another site about 1 hour's further travel.

Enroute to Kollen Fjord  we encountered two Polar Bears, a female with a coy (cub of the year). The two were about 700 metres from the ship on the side of a hill of moraine. Outside the weather had taken a turn for the worse.  It was blowing a gale with a mixture of sleet and snow. Most people chose to observe the bears from the comfort of the Observation lounge on deck seven. The bears however are perfectly adapted to such inclement weather.  The two lay down in the moraine and observed us observing them.

As it continued to blow outside it became more and more clear that to attempt a landing in such conditions would not be the possible. The timing of these bears could not have been better.

After about 45 minutes we left the bears and mounted a schedule of lectures to fill the late afternoon and early evening. One of the challenges the Expedition Team faces when in Svalbard is to actually find time in our busy schedule of landings to put on lectures! 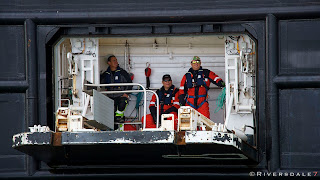