This morning when we entered into Liefdefjorden, it was snowing that one couldn't see where we really were. Of course the bridge knew exactly with all their equipment but looking out from the breakfast table it was all white and light grey around. At position in front of Monacobreen all of a sudden there were some lighter spots and the mountains were visible. 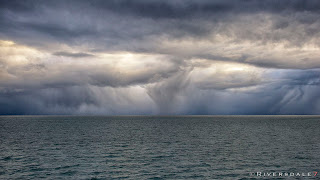 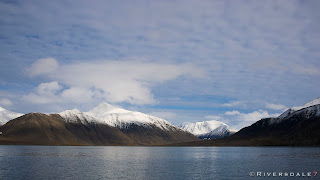 For some time it changed repeatedly between white and a little bit of visibility - slightly improving. So we decided to start with the polar circle boat cruising in front of the glacier. The right decision, because within the next hour the visibility improved further. In this light situation with a thin layer of clouds and snow on the mountains almost all the way down to sea level, the glacier front appeared in intense blue colors. 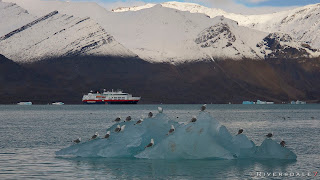 During lunch time we left Liefdefjorden, crossed Woodfjorden to the eastern side to land at Mushamna. The hut was built during the late 1980s by Reidar Hovelsrud. He started the construction in the inner part of Wijdefjorden, but he was forced by the administration to move to another place in the northern part of Woodfjorden. When he arrived with the ship that carried all the construction material it was not possible to land there and the decision was made to land at Mushamna where the hut and its later extensions and additions are today located. 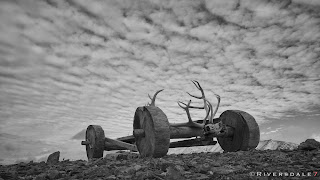 Part of the passengers went on hikes into the valley behind Mushamna, others enjoyed a walk around the buildings and along the shoreline of Woodfjorden.

Later in the evening we arrived at 80 dregree North where the small island of Moffen is located. This time there was a big group of walruses ashore and not as lazy as they sometimes seem to be ashore. 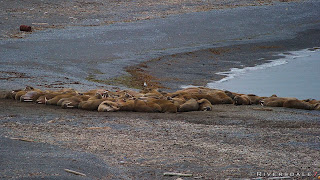