My favourite thing to do on board Fram is to go cruising in our Polar Cirkel boats, especially when there is lots of ice. This morning at 08:00 we were anchored at the head of Liefdefjorden not far from the large and beautiful glacier called Monaco Glacier (Monacobreen).  At 08:30 we put the Polar Cirkel boats in the water and went for a cruise along the glacier face. Monaco is a tidewater glacier. The terminus is a full five kilometres long. In the thirty minutes that was allotted for each cruise we were able to see much of the glacier face. On board Fram we have a minimum safe distance to a glacier front of 200 metres.  This is still close enough for great photos and with good binoculars you could see thousands of seabirds feasting in the areas of fresh water glacial outflow. 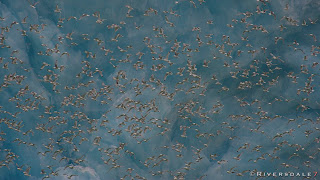 Monaco is an actively calving glacier. It seldom fails that on a visit to Monaco large chunks of ice fall spectacularly into the sea.  Today was no exception and as a result there was a lot of brash ice extending about three hundred metres from the glacier.  We were able to explore the edge of the brash where hundreds of Black-legged Kittiwakes, Northern Fulmars and Glaucous Gulls perched on the ice.  Parasitic Jaegers zoomed through the air chasing Kittiwakes with the purpose of stealing their food.  Today we were especially in luck as there were several Ivory Gulls along the glacier near the fresh water outflow.  Ivory Gulls are one of the most beautiful gulls in the world.  They are snow white with black legs and a yellow bill and are found only in the high arctic.

By 13:30 everyone had had a chance to go for a cruise in the Polar cirkel boats and at 14:00 we heaved anchor and headed for our next destination, Mushamna.

This time we chose a different landing site at Mushamna.  A site that was more sheltered in a beautiful bay. We started the landing at 16:30. The first people off the ship were those that had opted to go on a 3 hr hike.  While it was another overcast day, it was very good conditions for hiking.  Once all 100 hikers were on shore the Polar Cirkel boats began ferrying people to a beach closer to the hunter's cabin. The Expedition Team established a large perimetre within which everyone was free to roam.  In a small pond beside the cabin there was a family of Red-throated Loons and a small flock of Brant Geese as well as several Common Eider ducks.

It is possible to over winter in the cabin.  Each year there is a different tenant as qualified people need to apply to the Governor of Svalbard.  Tenancy is for one year only, with a possibility to extend for a year, however Mushamna has been empty for the past four years. 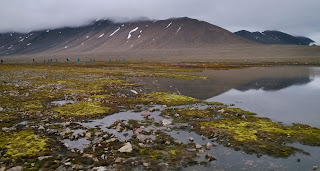 At around 20:30 the 1st of the hikers returned to the landing site.  This hike is not considered difficult nevertheless there is a substantial amount of steady uphill walking which often leaves more than one person short of breath.  The hike winds through a beautiful valley with steep mountains on three sides.  This is a place where you can truly listen to the silence. There was barely a breath of wind.  No birds calling.  No engine noise from the ship or Polar Cirkel boats.  None of the noise associated with the trappings of a modern society. It was  truly serene. 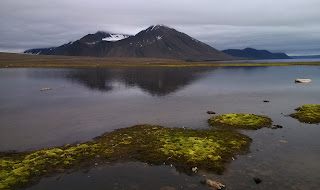 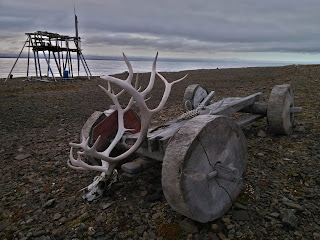 Soon after the last hiker's returned to the ship, Fram was on her way to Moffen Island where we hoped to see Walrus. At about 22:30 we crossed N80˚ and could plainly see a group of Walrus huddled together just up from the beach.  Fram stood about three hundred metres off shore where we had excellent views of these unique marine mammals. 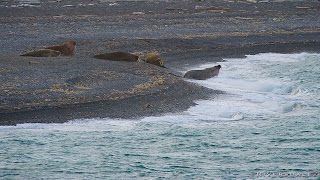 In the afternoon we set our course for Moffen Island which would be the most northerly point of our journey. It would take several hours to to get there so we used the opportunity to slot in several lectures on ice and geology.

Moffen Island is a protected nature reserve situated just above 80˚ N. That is very far north indeed. To quote a friend of mine, “if you had a globe of the earth you would need to look under the brass cap at the top to find Moffen Island.”

Shortly after 17:00 we approached the tiny island. It was barely above sea level and seemed no more than a sand bar.  However, this low, flat piece of sand and gravel is very important as a Walrus haul-out and is also an important nesting site for Arctic Terns. Indeed, we counted between sixty and seventy Walruses in three groups packed tightly together.

Well, this was a cause to celebrate! Not only did we have excellent views of one of the most extraordinary of all pinnipeds but we had crossed 80˚ North at the same time!