This day started with ice cruising in front of the beautiful Monacoglacier in small boats. We enjoyed the view of the 5 kilometer glacier where big chunks of ice calf off leaving the surface bright blue. The boat driver maneuvered very elegantly between all the ice filling the bay. It was amazing to get so close to the glacier and hear the crackling from air bubbles bursting in the ice, the many kittiwakes screaming and we should even enjoy the sun warming our bodies. Then came the message; a Polar bear was spotted some kilometers away. Quickly we took our last pictures of the Monacoglacier before we rushed over to get a closer look at the Polar Bear. It was a nice healthy female bear sleeping, only lifting her head to scan the area once in a while. On the way towards the bear we passed the passengers that had chosen to do the kayak excursion today. In their small kayaks they had a fantastic experience paddling in front of Ida glacier. Back on board it was lecture time, and what could fit better than a polar bear lecture? At the same time Manuel the charming bird man did a lecture titled Quack Quack. 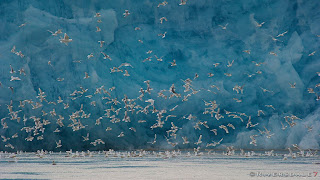 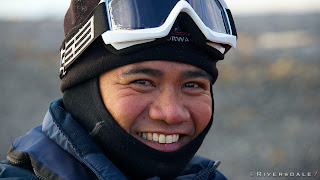 The sun was still shining when we reached Mushamna. On land the story about the Norwegian trapper Reidar Hovensrud was told. He was passionate trapper that built the station here in Mushamna in 1987. In 1997 the cabin was sold to the Governor of Svalbard and anybody with an interest for trapping can apply to run this cabin. So if you are up for the challenge it might be possible spend some winters here hunting artic fox, reindeer, seal and collect Eider down.  The last years however the governor hasn't lent out the cabin and apparently this is not because the lack of application. A polar bear also decided to visit the area around the old trapper station. It was swimming towards us for a while, but luckily it decided to go in another direction so we could look at it on a safe distance. 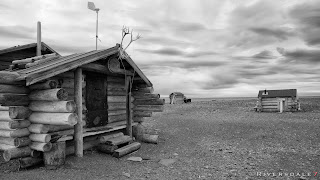 This evening the galley crew was putting on an ice and fruit carving show for us. The ice was of course picked up from the Monaccoglacier and was now shaped in the most amazing ice sculpture. The melon, carrots and apples was transformed to birds and other creatures. 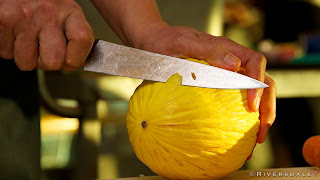 Fram has been camping in Antarctica the last season with great success and many happy campers. Therefore this is something we would like to start offering here on Svalbard as well. Some of the members of the Expedition Team gladly volunteered to do a test trip and spend the night on Reinsdyrflya. We found a very nice camping area and enjoyed an evening hike. As we have seen earlier today there are many polar bears on Svalbard and it`s always needed to have someone awake to keep a look out for polar bears. As those who were not designated to do the polar bear watch was getting ready for a good night of sleep, polar bear number 3 showed up.  It was a young curious bear who wanted to have a closer look at the camp site. To avoid the bear coming all the way over to the camp we had to fire four flares with the signal pistol to scare him off. The bear slowly moved away from the camp and we packed up our gear and got back on board.