A rainy day deep in the southern fjords

Today we visited a town- Narsaq- and a settlement -Qassiarsuk- both in the amazing fiords of southern Greenland. Our weather forecast for today was for heavy rain and unfortunately the weather people were right. It rained for most of the day but our spirits were not dampened! We decided that there is no such thing as bad weather, only bad clothing, but were were so fortunate to have our wonderful blue jackets which kept us dry. The rain made photography quite difficult but below are a few images to give you a flavour of the two places we visited.

Today was Sunday and Narsaq (a "plain" in the Greenlandic language) was very quiet when we arrived in the morning. Our guests had options to take a guided tour around town or walk into the hills behind Narsaq. The low-lying clouds meant that we could not go up very far, but it was great to stretch the legs. 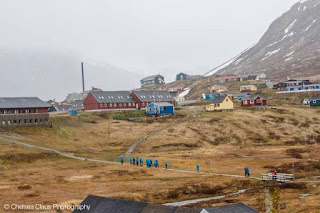 Over lunch, we sailed deeper into the fiord called Tunugdliarfik in Greenlandic. For most of us, it is easier to call the fiord Erik's Fiord after Erik the Red. He arrived in Greenland in 982 AD, and founded his famous farm Brattahlid ("steep slope" in old Norse), famous because it was the first farm founded in Greenland. A little over 100 years ago, the Greenlander Otto Frederiksen also chose to settle in this place and called it Qassiarsuk. It then became an most important sheep farming region of Greenland and still his grandchildren are sheep farming today. This long history of farming, in what is otherwise a cold, Arctic country, has produced luxurious, thick soils, the most productive in Greenland.

It was very exciting to see and really experience the ruins associated with the farm Brattahlid. Foundations of a small and large church was clearly visible. The townsfolk of Qassiarsuk have built replicas of the first church of Greenland, and a longhouse, where the Viking family lived. 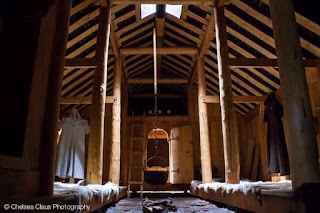 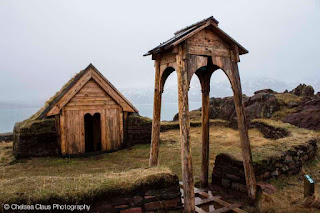 Four brave guests could not be stopped by the weather and hikes with expedition team members along the shore and up the hill behind the community. The idea was to get up to the top from where we could see over to the next fiord. However, it was so foggy on top that we decide to descend and explore the Viking ruins below. 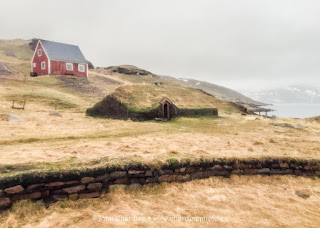 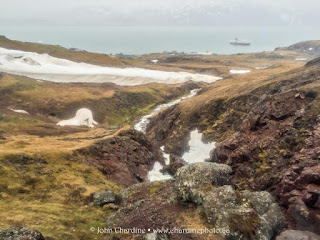 Many guests went on a small boat cruise to the well known Qooroq Ice fjord just next to Qassiarsuk. Even though it was rainy and a bit misty passengers enjoyed their first close contact with the glacier ice. 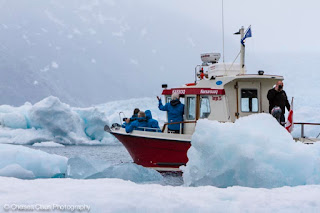