We woke today to strange noises in the middle of the night. Normally, except for the noise of the fan in your room, or the gentle hum of the ship, you notice so particular sounds on the Fram in the middle of the night. This night was different as at about 0400h the bow thrusters started up. This could only mean two things- either we were coming into port or we were changing course to avoid ice. It was the latter. The promised ice that we had hears about of southern Greenland was around the ship.  The Captain and Chief Officer skilfully navigated Fram into the ice belt that lay outside Qaqortoq and surrounding area- out destination for our first day in Greenland. 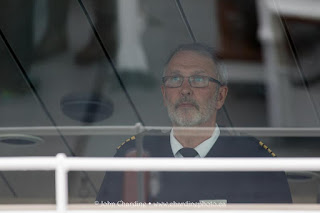 A very unusual sighting for Greenland was a large group of Greenland or Harp Seals on ice floes. There were adults and younger animals (with spots) in the group. Greenland Seal adults have a black face and dark saddle on the back in the shape of a Harp- hence the North American name for the species. 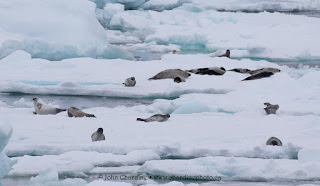 It was very satisfying to see land- Greenland- after spending two days at sea from Iceland. 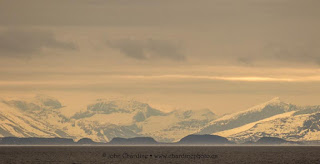 We made it through the ice belt and then entered Julianehåbsfjord on our way to the ruins at Hvalsø. On the way we passed Qaqortoq, which used to be known as Julianehåb. All Greenland towns had Danish names from the colonial times. Since Greenland got its homerule in 1979 Greenlandic names have to be used as Greenlandic is the official language.

At Hvalsøy (Whale's Island), we were thrilled to see the ruins of an ancient Norse church dating from the early 13th century. From the ruins in Hvalsøy we know about the last confirmed episodes out of the Viking time before the Norse colonies disappeared. Today the ruins are an UNESCO World Heritage site. 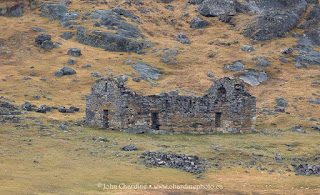 The afternoon we spent in Qaqortoq the capital of the southern fjords, the so-called sheep country. Here we got different possibilities to learn about Greenland's fabulous Southern fjords. The town looked typically (for Greenland) beautiful with the colourful houses perched all the way up the hill. 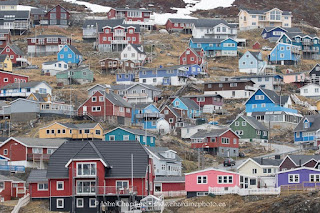 One group went on a hike behind the city along a large lake. Spring is so late in south Greenland that the lake was still frozen. Still, the Arctic vegetation was coming to life in the long days that we now have in the late Arctic spring. Several bird species were seen along the path including the Lapland Bunting. 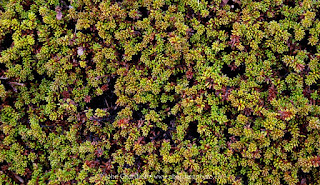 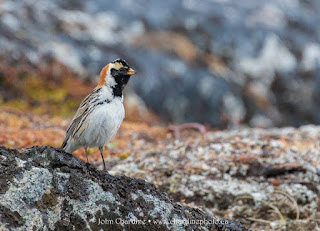 The second group got lots of information about Qaqortoq, its inhabitants and their way of life on a guided tour through the city. Most were especially impressed by the art cut in stone of Greenland's famous artist Aka Hoegh. 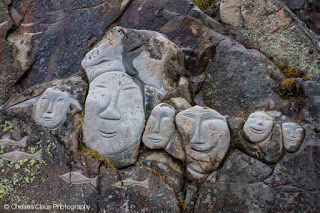 The third ground went for a very typical "Kaffeemik". They were invited to a private house for a Greenlandic buffet with nearly everything Greenland's kitchen can offer; seal and lamb meat, salmon and halibut in different variations, fish cake and caviare, shrimps and capelin fish. As a dessert there have been several different cakes with Arctic berries, liqueur made of berries from the tundra just next to the town and Angelica schnaps, to feel better after all this fabulous food. Food is always a part of the culture, now we have the feeling we got a good first impression of Greenlandic culture. 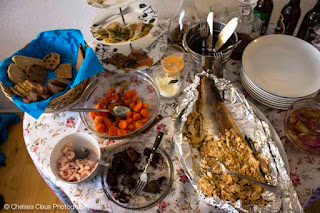 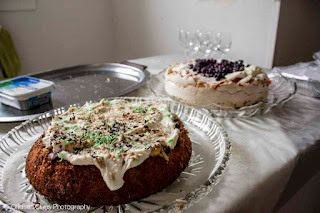