This was our final half-day at sea before reaching Antarctica. Conditions were generally foggy and the sea lopped back and forth. As predicted yesterday, bird life increased around the ship as we approached Antarctica, and at one stage at lunch we had Cape, Antarctic, Southern Giant and Snow Petrels, and Southern Fulmars following us. Every now and then we caught a glimpse of King George Island through the mist and as this happened, our sense of anticipation heightened. 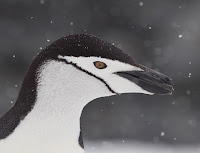 After lectures and briefings in the morning, we reached Half Moon Island in the mid-afternoon; this was to be our first Antarctic landing. Half Moon is a crescent-shaped island 1.25 mi long, lying in the entrance to Moon Bay on the east side of Livingston Island, in the South Shetland Islands. This island was known to sealers in the area as early as 1821. 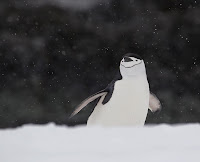 This scenic island is the site of a Chinstrap Penguin colony but is also home to breeding Wilson’s Storm-Petrels, Antarctic Terns, Kelp Gulls and Snowy Sheathbills. Our main focus was the penguins and we had great conditions for photography, and for studying the breeding behaviour of the Chinstraps- and there's a lot of it at this time of year! The light was bright but indirect because of the clouds, and a light snow fell for most of the landing. Towards the end of our stay, the air cleared and we could see the imposing mountains of Livingston Island to the west.

We returned to the ship to a wonderful Chilean buffet and later in the evening we were treated to a sail through Neptune’s Bellows into the flooded caldera of Deception Island, an active volcano! The light was fading but this did not deter our many intrepid photographers! 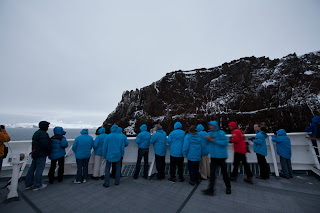