Named by Capt. C.A. Larsen, the Norwegian founder of the whaling industry in the remote island of South Georgia, Fortuna Bay was our first landing of the day. We had sailed for two days from the Falkland Islands and woke up this morning to breath-taking views of the north coast of South Georgia. After an early breakfast the Polarcirkel boats went into the water and transported us across to the beach in front of the Fram. There was a significant swell in the bay which made landing our passengers and getting them back off the beach rather difficult. Nevertheless the trusty expedition staff and the expert boat drivers made the landing happen with aplomb. 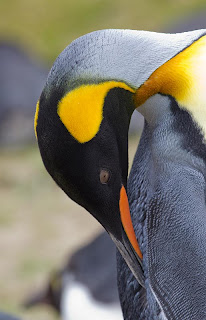 Fortuna was spectacular. It is the site of a medium-sized King Penguin rookery and a breeding site for Fur Seals and Elephant Seals. As we walked up the beach towards the penguin rookery we were struck by the smell of the male Fur Seals- believe it or not, a mix of garlic and fried onions! This time of year the fast-moving males are not very aggressive but later on, great care has to be taken around them and we approach to only 50ft.

Our reward at the end of the short hike was the King Penguin colony. Adults and many brown, fat chicks stood together in large groups, vocalizing, interacting with each other and generally enjoying the beautiful sun and relatively calm conditions of the morning. Some chicks were attended by one parent and occasional feedings were witnessed. The chicks were eager to approach us probably in case we were their parents returning with food. Of course they were all disappointed! 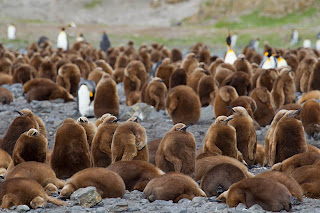 After the landing, intrepid hikers were transferred to the other side of the bay to start the Shackelton Walk from Fortuna to Strømness. The hike, in the footsteps of one Antarctica’s most famous explorers, was exhilarating and the summit provided panoramic views of this part of South Georgia. 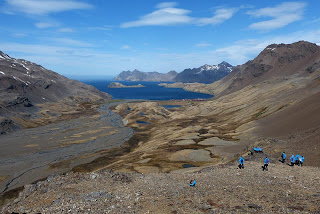 As all this was happening the Fram sailed around to Strømness and we started the landing there in the late afternoon. As the sun went down the fur seals, sea lions and King Penguins were lit up with golden light with a backdrop of brilliant greens or surprisingly photogenic rusting metal of the old whaling station there. 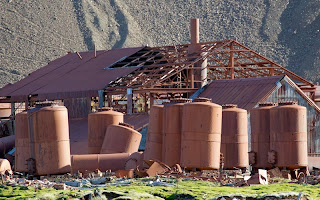 We go to bed tonight tired but very satisfied in the knowledge that we visited a unique, remote spot on this planet and left only a few foot prints.

Email ThisBlogThis!Share to TwitterShare to FacebookShare to Pinterest
Photograph(s) by: Christian Walter (Rapa Nui), John Chardine
Newer Post Older Post Home
Welcome to MV FRAM's Expedition Blog!
MV FRAM is the most modern expedition cruise vessel belonging to the Hurtigruten fleet, roaming polar waters and taking people to remote places where only few go. In order to give you the chance to travel with us, even if only on your computer screen, we have created this blog. Here you can see what we have seen and read what we have done.
And, maybe you will be onboard with us one day!
All About MV FRAM - here
FOLLOW US ON FACEBOOK !