As we sail southwest in the Scotia Sea from South Georgia to Antarctica, the air is developing that tingling cold you associate with polar regions. The cold sea gently rolled today in the aftermath of the storm we experienced yesterday.

The water we sailed over today was deep and deep water is relatively unproductive because of low nutrient levels at the surface where the light is. The seabirds told us these waters were unproductive by their relative absence. We had a few of the ever-present Cape Petrels with us all day and the odd Giant Petrel and Black-brown Albatross- nothing like the abundance of seabirds we had yesterday off South Georgia.

And now to the main topic of the blog- icebergs. They are an iconic symbol of polar regions and we saw our first good-sized ones today. In Antarctica, they come in several types- the one we saw today was tabular which means “like a table”.

Tabular icebergs originate from ice shelves. Ice shelves are portions of the Antarctic ice cap that flow down and over embayments. The ice is supported by the water and the adjoining land, and remains intact. However, pieces often break off due to tidal action, which moves the shelf up and down. Contrast this with icebergs that calf from a glacial front- they break off erratically and produce almost randomly-shaped chunks of ice. 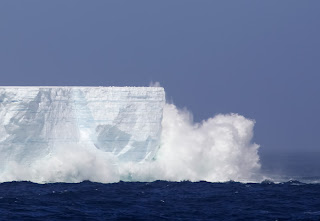 There is a lot of interest in climate change in the Antarctic, which shows itself most obviously in the breakup of large parts of ice shelves, which float out to sea and form often huge ice islands. This is happening on the Antarctic Peninsula where warming is taking place at a higher rate than anywhere else in the world. Off the peninsula on the main part of continental Antarctica, the climate is actually cooling a little.

So, we continue out voyage to Antarctica and have one more sea-day before we arrive at the “Last Continent”.