We are sailing! We are Sailing! Smooth water – We feel free!

This morning we awoke to the smell of the South Atlantic ocean which also gave its presence away with very small movements of the ship. So we had officially left the Rio de la Plata and were on our way south! Temperatures were still warm at about 17° and the outside air felt pleasant on the face. 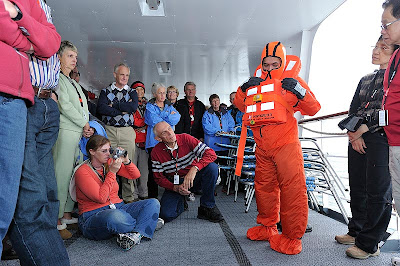 We had a busy day with a full slate of lectures morning and afternoon, and our mandatory lifeboat drill in the morning before our “Fram University” started. 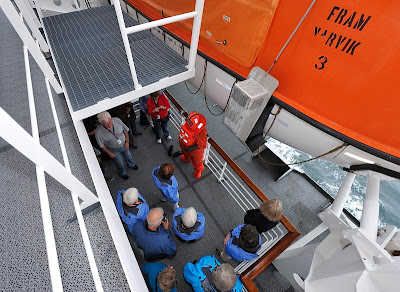 Throughout the day, seabirds followed us along on our journey and for many of us it was our first chance to sea the iconic albatross- we saw many immature Black-browed Albatrosses roaming the sea around us, looking for food. We also saw petrels and shearwaters and even penguins. On the mainland to the west of us lies a huge colony of Magellanic Penguins at Punta Tombo in Argentina and “our” birds seen from the ship were undoubtedly from there. Several South American Sea Lions were also spotted laying on their backs, seemingly enjoying the day. 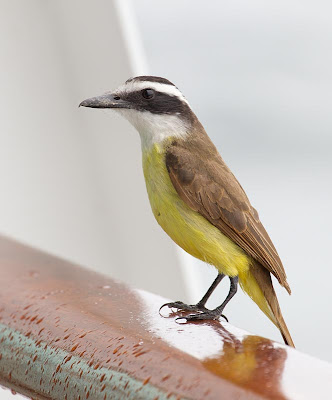 By mid-morning it was clear we had at least one uninvited stowaway on board the ship. It was a bird called a Great Kiskadee, which had likely come on in Buenos Aires or before. It is very common for birds to hitch lift on board a ships. We are hoping that the bird eventually decides to leave us before we reach the Falkland Islands on Monday.

As the next days go by, our sense of anticipation for what we will experience in the Falkland Islands, South Georgia and Antarctica will only get stronger!

Email ThisBlogThis!Share to TwitterShare to FacebookShare to Pinterest
Photograph(s) by: John Chardine, Marsel van Oosten
Newer Post Older Post Home
Welcome to MV FRAM's Expedition Blog!
MV FRAM is the most modern expedition cruise vessel belonging to the Hurtigruten fleet, roaming polar waters and taking people to remote places where only few go. In order to give you the chance to travel with us, even if only on your computer screen, we have created this blog. Here you can see what we have seen and read what we have done.
And, maybe you will be onboard with us one day!
All About MV FRAM - here
FOLLOW US ON FACEBOOK !