An eventful day at Monacobreen and Mushamn

For some of us this day started very early. In the night, at around 04.00 we woke up to the announcment: Polar bear on the shore! Since this was the first polar bear we have spotted so far, many of us were eager to get on the deck and have a look. 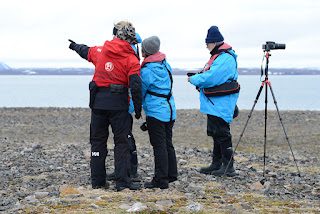 In the morning we arrived Monacobreen in Lieftefjorden. Monacobreen has a magnificent glacier front and most of us went ice cruising with polar circle boats closer to the glacier front. We even saw calvings! Some of us went on top to Ringertzfjellet, a 630 meter high climb, while others went kayaking to Idabreen.

In the afternoon we arrived at Mushamna in Raudfjorden. A quite new trappers cabin is situated where we had the landing. The expedition team told us the stories behind the place, and this cabin was quite luxurious compared to most of the other trapper cabins we have seen. It even had its own sauna! While most of us did the landing on Mushamna, a few of us went with polar circle boats up to Gråhuken, where Christiane Ritter overwintered when she wrote her famous book “a woman in the polar night”.