The FRAM entered the channel into Paamiut just before 8am. The day was sunny and without much of a breeze. We found the smallness and calmness of Paamuit a welcome change after yesterday’s busy day in Nuuk. The museum and the church were smaller as was the grocery store. 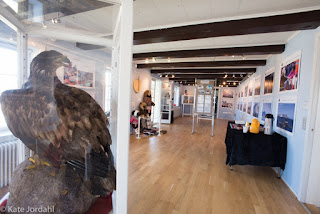 Some of us viewed the turf house on our walk to the overlook view point. Others took to the water for kayaking and some went on a fishing trip with the Fram’s officers. Seal were sighted throughout the trip but no edible fish were caught.
While no hiking was planned this for this landing, we did some exploration and perhaps on our next landing we can organize a hike to the inland lake that is the town water supply. 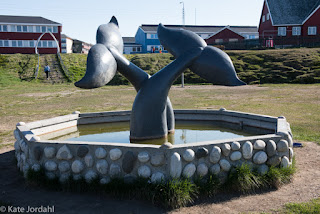 Grønnedal means green valley and we were at this location about 1900 or 7pm. Gronnedal is now abandoned. Formerly it was a Danish military post and prior to that it had been an American military installation both of these military installations were to safeguard the nearby cryolite mine. Cryolite is a very rare natural mineral composed of Sodium, Aluminum and Flourine.  During World War II this singular cryolite deposit was very important as cryolite was used in the refining of bauxite ore to produce high quality aircraft aluminum. At present cryolite is a manufactured mineral produced artificially. In 1987 the mine closed and later the Danish military has abandoned its nearby installation. 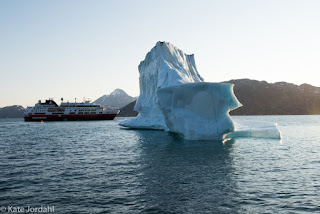 At present the snow hares and muskox are the only occupants of the long green valley behind the abandoned boarded-up buildings. Most of the muskox we saw were on the valley side-slopes.
However a few of these bulky and shaggy beasts were photogenic-ally kind enough to continue grazing on the slopes just below the abandoned base buildings.
It was 2200 or 10pm when we returned to the FRAM and looking back a great time was had by all. The only local inhabitants we saw were musk-ox. 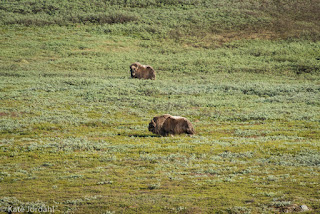 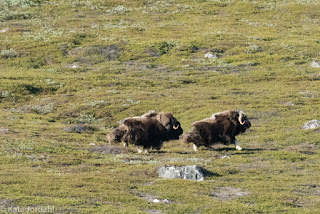