OUR LAST DAY IN GREENLAND: HVALSEY AND QAQORTOQ

Hvalsey church is just above the beach and it the most well-preserved medieval Viking ruin in Greenland. The roof is gone but the intricate stone construction of the walls and the doors and window openings serve as a testament to the solid construction of the 14th century builders. On 16 September 1408 a wedding was held in this church and this marriage was recorded in the Iceland church archives two years. This is the last documented record of a service at this church and the timing and cause of disappearance of the nearby inhabitants, is not know. 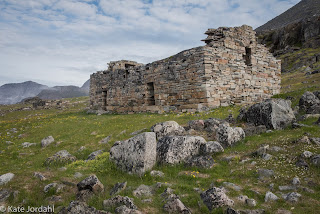 Near the church site we saw the rock outline remains of several other farm buildings. It is probable that the stones in the walls of all these buildings were infilled with clay to make them wind-proof and water-proof. By noon the sun was shining and we left the mosquitos behind as the FRAM motored to Qaqortoq. 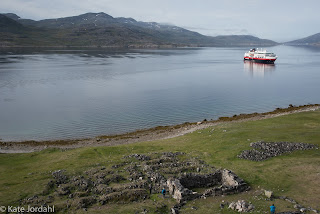 Qaqortoq has brightly houses and a population of about 3,500 people. Here we had our choice of hikes, town walks plus a visit to the local tannery or boat trips to the nearby Agricultural Station. All of these were enjoyed in the afternoon sun. Some of us did not go much of anywhere but we walked a short way and visited with the family of Aka one of our Greenlandic expedition staff members. Aka was born in Qaqortoq and lives there now, plus Aka has her twin sister and her mother there in addition to her husband and 4 children. Aka and her family were kind enough to invite many of us to their house for a Kaffemik. This event involves eating food and desert treats and conversations that covered many topics. Our conversations were suspended for a time as Aka’s twin sister showed us the traditional clothing and boot styles worn my men and women. When it was time to go all of us were well fed and I suspect the FRAM left a little lower in the water than when we arrived a few hours earlier. 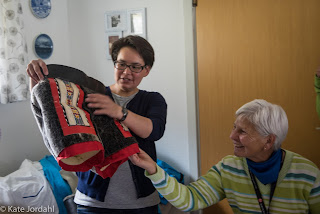 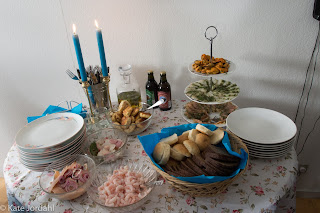 Leaving was a sad event not only because this was the FRAM’s last stop in Greenland but because Aka left the FRAM to stay in Qaqortoq with her family. And sadly we all waved good-by and the FRAM left the dock and headed for Cape Farvel and then on to Reykjavik, Iceland.