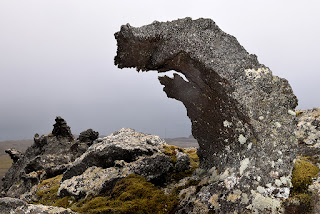 As we were having breakfast, we arrived at the Norwegian Island of Jan Mayen. The FRAM anchored and we went landed at a black volcanic sand beach. About a 10 minute walk up the dirt road we found the station buildings. The main purpose of the station is to maintain the radio-navigation systems that have transmitters on the Island. In addition ornithologists and geologists also conduct research on the island. 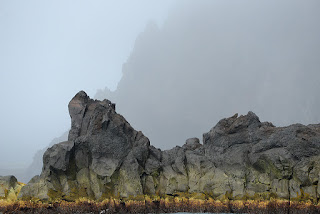 Inside the main building we found a museum with photographs and artifacts for the whaling days to current times. The building also contained a small shop with maps and t-shirts for sale. There were also postcards and stamps for sale and many of us wrote cards and posted them to friends and relatives. We were told the next outgoing plane flight, with mail, would be in early August and most of us will be home before the cards reach their destination. 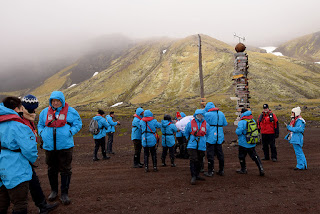 During most of our time ashore it was windy with light rain and low clouds. These conditions made photography challenging. As we returned to the FRAM the sun began to burn through the clouds a bit and as the FRAM headed northward along the southeast facing coast the clouds thinned and often parted. These conditions gave us a clear view of the coastal lava beds and the glaciers that descend from Beerenberg. This volcanic, glacier covered mountain, has a crater at its peak and the highest point on the crater is 2277m or 7514ft high. The Captain kindly motored the FRAM along the coast and around the northernmost tip and this course allowed Uli our geologist and Olav our glaciologist to explain the features we were seeing. Olav was particularly enthused as he had worked on Beerenberg soon after the large eruption in 1970. 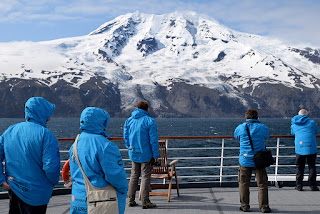 Eventually we had to leave the peak and Jan Mayen behind as the FRAM set course for Spitsbergen and we expect to arrive there in the afternoon, the day after tomorrow. 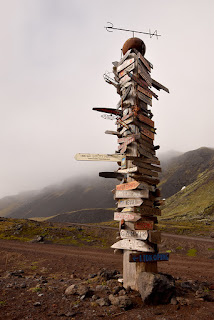 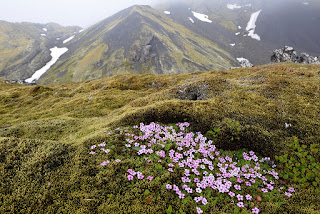 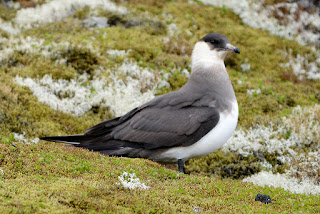