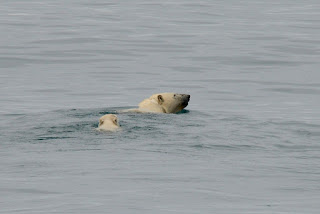 Understanding the name of this group of islands requires an explanation .The credited discoverer is Wilhelm Barents. In 1596 he named this group of islands Spitsbergen because of the jagged mountain peaks he sighted along the western coast. The island group was recognized as an archipelago and came under Norwegian sovereignty in 1925. The Norwegians re-named the archipelago as Svalbard, with the name Spitsbergen then restricted to the largest island of the group. 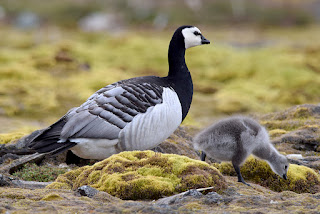 The day began with the last of our bridge visits and then we had a few lectures. Tessa presented Spitsbergen through the four seasons and Steffen opened us to a wider view asking: Are We Ruining the World. Later Bob covered the range of acceptance for global warming and or climate change. We recognize that the views range from complete rejection to acknowledgement of a fractional human role in the change to people who believe every sensational headline in the popular press. Tomorrow we will gather in the Panorama Lounge for discussion session on this topic and we will have the opportunity to express our individual views. 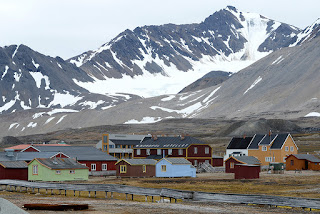 Our afternoon landing at Ny Alesund could not have been more pleasant. On our approach we saw a mother polar bear and her cub swimming across the fjord. On land the temperature was about 9°C or 48°F and though overcast there was no wind. It was a comfortable walk to see the nesting terns and geese and view the historic houses and the newer research buildings. Formerly Ny Alesund was a mining town but the mines closed over 50 years ago and now it is a polar research center. Over half a dozen nations have scientific stations here. To encourage scientific interaction and communication there is a single dining hall where the scientists gather for all their meals. Year round research is focused on the high atmosphere, the aurora phenomena and satellite orbit tracking. Closer to the ground geological and glaciological investigations are conducted during the summers.

Our evening entertainment was a skit explaining the origin and travels of the rare FRAM whisky. This whisky has traveled from the Arctic to the Antarctic several times and only a few bottles remain for sale. 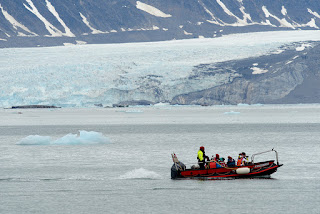 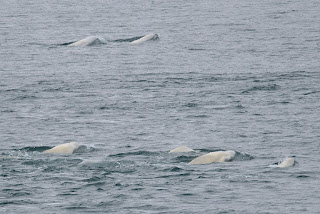